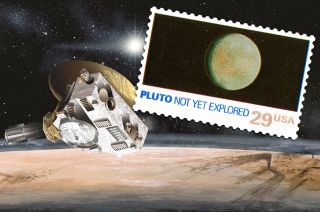 A 1991 U.S. postage stamp flying aboard NASA's New Horizons probe to Pluto is soon to be outdated given its inscription labeling the dwarf planet as “Not Yet Explored.
(Image: © NASA/USPS/collectSPACE.com)

They are three words that, after next week, will never be used to describe the dwarf planet Pluto again. And they are about to witness their own expiration.

The phrase, which first appeared in 1991 along the bottom of a 29-cent U.S. postage stamp depicting Pluto, is now affixed — in the form of one those 24-year-old stamps — on NASA's New Horizons robotic probe, which as of Tuesday (July 7) is just one week out from flying by the mysterious dwarf planet. [Destination Pluto: NASA's New Horizons Mission in Pictures]

The encounter will make space history — completing the initial reconnaissance of our classical solar system — and, because the stamp is onboard, it will make some postal history, too. Not only is it thought to be the first time that a U.S. postage stamp has been present for the event that effectively made its design outdated, but it is also the farthest that any stamp has ever traveled before.

"We're honored to have the 'Not Yet Explored' stamp travel the billions of miles to Pluto," Mary-Anne Penner, the U.S. Postal Service's acting director of stamp services, said in an interview with collectSPACE.com. "We are hoping that the New Horizons mission provides Pluto with a 'stamp of approval,' regardless of its status in the solar system."

The story as to why the 1.5-inch by 1-inch (3.8 by 2.5 centimeters) stamp is among the nine mementos flying with the piano-size probe to Pluto is based in both the stamp's and the mission's history.

The United States Postal Service (USPS) didn't just issue a stamp in 1991 to highlight the fact that Pluto had never been explored. Instead, it was part of a 10-stamp "Space Exploration" set that was first proposed by Howard Paine, the postal service's art director, and artist Ron Miller.

As released, each stamp depicted one of the planets (the 10th stamp was for Earth's moon) and a NASA robotic spacecraft that had been sent to study it.

"Paine had been a fan of my first space art book, 'The Grand Tour,' and thought the subject of the planets would make an interesting stamp set," Miller recalled in an email to collectSPACE.com. "The original idea was to just focus on the worlds themselves. It was only later that spacecraft were added [because] the stamp committee thought there should be an American connection with each planet."

And so Miller went about designing the art for the stamps that, for example, paired Mariner 10 with Mercury, Viking with Mars and Voyager with Saturn, Uranus and Neptune.

All of the planets (and Earth's moon) had a partner probe to go with them — all, that is, except Pluto.

On Oct. 1, 1991, when the stamps were released for sale, Pluto was still some 15 years from losing its planethood in a decree by the International Astronomical Union (IAU). But even then it was the odd planet out, having never had a spacecraft visit.

Miller doesn't remember who came up with the tagline "Not Yet Explored," although he suspects it was Paine.

As it turned out, among the people who took notice of the Pluto stamp and its "not yet explored" taunt were a group of engineers working at NASA's Jet Propulsion Laboratory (JPL) in Pasadena, California. JPL had been, and continues to be, responsible for managing most of the space agency's planetary missions (though New Horizons is based out of Johns Hopkins University's Applied Physics Laboratory in Baltimore, Maryland).

"Some JPL'ers saw that stamp and decided it would be a great idea to go to Pluto," said Alan Stern, New Horizons' principal investigator, of the Southwest Research Institute in Boulder, Colorado, in an interview with collectSPACE.

The JPL engineers were able to run their ideas for sending a probe to Pluto by the NASA Administrator but neither he nor they were aware at the time that a group of scientists had been formulating such a mission since Voyager 2 flew by Neptune in 1989.

"The stamp motivated [the engineers], but the scientific community doesn't work that way," Stern said. "You don't advocate for a billion-dollar mission because some stamp says 'not yet explored.'"

"That stamp was often used as a sort of rallying cry," said Stern. "And when we launched New Horizons, I made sure a copy of that stamp was on the spacecraft being flown to Pluto."

And so now, in what may be the ultimate of self-correcting acts, a "Not Yet Explored" stamp is about be a part of the first exploration of Pluto.

"It was correct at the time we printed the stamp," Penner noted, "[but] we are very excited about this, and we're glad to be part of this mission."

After a 9.5-year journey speeding through space, the New Horizons probe is set to make its closest approach to the dwarf planet at about 7:50 a.m. EDT (1150 GMT) on July 14. It will point its cameras and science instruments at the small world, providing the first up-close look at Pluto.

"I'm very proud to have been a part — however small — of this project," shared Miller. "It gives me a very proprietary interest in the planet Pluto!"

Click through to collectSPACE to see a photo of where the Pluto "Not Yet Explored" stamp was affixed aboard the New Horizons spacecraft prior to launch.