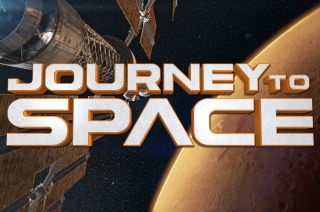 "Journey To Space," now playing in giant-screen theaters, tells the story of what the next chapter of space exploration will bring
(Image: © K2 Films/Giant Screen Films)

A new giant-screen documentary is now launching audiences on a "Journey to Space."

"Journey To Space," narrated by actor Patrick Stewart, is now playing at NASA visitor centers, space museums and science centers across the U.S., with more venues being added weekly. The large-format movie, co-produced by K2 and Giant Screen Films, showcases NASA's plans for the future of spaceflight, including landing astronauts on Mars.

"Now we are fashioning vessels to set off on our greatest adventure of exploration ever, to Mars and beyond," says Stewart, who played Star Trek's Capt. Jean-Luc Picard, in the opening moments of "Journey To Space." [Watch the Trailer: "Journey To Space"]

The 3D film, sponsored by Toyota and Boeing, premiered at the Smithsonian's National Air and Space Museum in Washington, DC earlier this month. In addition to Stewart, "Journey To Space" features the voices of former and present NASA astronauts, including Chris Ferguson, the final commander of the space shuttle, and Serena Aunon, a physician and engineer currently waiting her first mission assignment.

"The film examines the challenges of sending humans into deep space, specifically a round-trip voyage to Mars, but not before showing lots of love for NASA's space shuttle program," Diane Tedeschi, associate editor of Air & Space magazine, wrote in an article previewing the movie. "The film seems determined to show off the shuttle's sculptural beauty, and shots of an orbiter barreling in for a landing at 235 mph and perched atop a 747 during a farewell flight over Washington, D.C. don't disappoint."

The film concludes with a scenario of how astronauts will actually get to Mars, live there, and then return home after a two-and-a-half-year mission. During "Journey," viewers are introduced to what may become the icons of the next chapter of NASA deep-space exploration: the Orion crew capsule; Olympus, an inflatable transportation habitat that can provide the work area and living space necessary for long-duration missions; and the heavy-lift Space Launch System (SLS) that NASA is building to launch Orion and its crew, as well as the vehicles needed to get astronauts to the surface of Mars.

"Through breathtaking imagery shot on the ground and in space, as well as personal accounts from past and current astronauts, 'Journey To Space' lays out in clear detail the bright future of America's space program and NASA's new mission to explore Mars and beyond," Therrin Protze, the chief operating officer for NASA's Kennedy Space Center Visitor Complex in Florida, said in a statement. "We invite the public to join us in viewing this film that celebrates the incredible accomplishments of the space shuttle that have served as a springboard for deep space exploration."

In addition to the Kennedy Space Center and National Air and Space Museum, "Journey To Space" is now open at:

And opening later in March at:

At least a dozen more venues are slated to show "Journey To Space" beginning in May and extending throughout the year. The movie will be coming to museums and science centers in: Arizona, California, Florida, Indiana, New York, North Carolina, Ohio, Pennsylvania and Utah.

Click through to collectSPACE.com to watch the movie trailer for "Journey To Space."