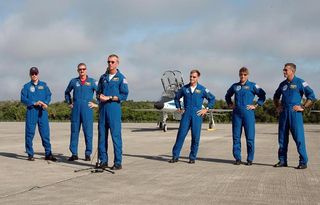 The clockis once more ticking down towards the launch of NASA's space shuttle Atlantis as sixastronauts prepare to rocket towards the International SpaceStation (ISS) on Wednesday.

The launch countdownfor Atlantis' STS-115mission to deliver newsolar arrays and trusses to the ISS began at 8:00 a.m. EDT (1200 GMT) asplanned, NASA officials said. The shuttle is set to launch at about 12:29 p.m.EDT (1629 GMT) on Wednesday.

"There's asaying that says if you work hard you bring yourself good luck," STS-115shuttle commander Brent Jett said Saturday of the missioncontrollers, technicians and workers preparing Atlantis for flight. "And ifthat's true, these guys deserve some good luck with the weather."

Atlantis' cargoof a $371.8 million set of new solar wings and 17.5-ton pair of trusses willmark NASA's first major ISS addition since late 2002and the third shuttle flight following the loss of Columbia and its crew.

The missionhas been delayed several times in the last week, first due a powerfullightning strike to the shuttle's Pad 39B launch site that promptedspacecraft checks which prevented launch attempts on Aug. 27 and 28. Mission managers stooddown on Aug. 29 to ready Atlantis to weatherthen-Tropical Storm Ernesto.