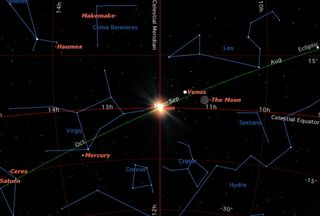 Sick of long, hot summer days? Well, you're in luck. Astronomically speaking, autumn is about to begin in the north.

On Monday (Sept. 22), at 10:29 p.m. EDT (0229 Sept. 23 GMT) autumn begins astronomically in the Northern Hemisphere. This also marks the start of spring in the southern half of the globe.

This date is called an equinox, from the Latin for "equal night," alluding to the fact that day and night are then of equal length worldwide. But that is not necessarily correct. [Earth's Equinoxes & Solstices Explained (Infographic)]

Referring to the equinox as being a time of equal day and night is a convenient oversimplification. For one thing, it treats night as simply the time the sun is beneath the horizon, and completely ignores twilight. If the sun were nothing more than a point of light in the sky, and if the Earth lacked an atmosphere, then at the time of an equinox, the sun would indeed spend one half of its path above the horizon and one half below.

But in reality, atmospheric refraction raises the sun's disc by more than its own apparent diameter while it is rising or setting. Thus, when the sun looks like a reddish-orange ball just sitting on the horizon, it's really an optical illusion. It is actually completely below the horizon.

In addition to refraction hastening sunrise and delaying sunset, there is another factor that makes daylight longer than night at an equinox: Sunrise and sunset are defined as the times when the first or last speck of the sun's upper or lower limbs — not the center of the disc — are visible above the horizon.

And this is why if you check your newspaper's almanac or weather page on Monday and look up the times of local sunrise and sunset, you'll notice that the duration of daylight, or the amount of time from sunrise to sunset, still lasts a bit more than 12 hours.

At the North Pole, the sun currently is tracing out a 360-degree circle around the entire sky, appearing to skim just above the edge of the horizon. At the moment of this year's autumnal equinox, it should theoretically disappear completely from view, and yet its disc will still be hovering just above the horizon.  Not until 52 hours and 10 minutes later will the last speck of the sun's upper limb finally drop completely out of sight.

This strong refraction effect also causes the sun's disc to appear oval when it is near the horizon. The amount of refraction increases so rapidly as the sun approaches the horizon that its lower limb is lifted more than the upper one, distorting the sun's disc noticeably. [Amazing night sky photos of September 2014]

Not as dark as it seems

Certain astronomical myths die hard. One of these is that the entire Arctic region experiences six months of daylight and six months of darkness. Often, "night" is simply defined by the moment when the sun is beneath the horizon, as if twilight didn't exist. This fallacy is repeated in innumerable geography textbooks, as well as travel articles and guides.

But twilight illuminates the sky to some extent whenever the sun's upper rim is less than 18 degrees below the horizon. This marks the limit of astronomical twilight, when the sky is indeed totally dark from horizon to horizon.

There are two other types of twilight. Civil (bright) twilight exists when the sun is less than 6 degrees beneath the horizon. It is loosely defined as when most outdoor daytime activities can be continued. Some daily newspapers provide a time when you should turn on your car's headlights. That time usually corresponds to the end of civil twilight.

So, even at the North Pole, while the sun disappears from view for six months beginning Sept. 25, to state that "total darkness" immediately sets in is hardly the case. In fact, civil twilight does not end there until Oct. 8.

Joe Rao serves as an instructor and guest lecturer at New York's Hayden Planetarium. He writes about astronomy for Natural History magazine, the Farmer's Almanac and other publications, and he is also an on-camera meteorologist for News 12 Westchester, New York.Follow us @Spacedotcom, Facebook and Google+. Original article on Space.com.