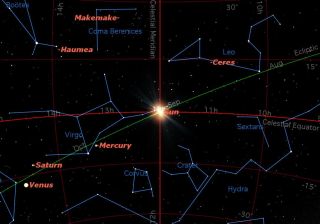 The sun crosses the celestial equator on September 22 at 4:44 p.m. EDT. On this date the sun rises due east and sets due west, and the day and night are of equal length.
(Image: © Starry Night Software)

The seasons will change this Sunday (Sept. 22), with the Northern Hemisphere moving into autumn and the South emerging from winter into spring.

The celestial event that marks this transition is called an "equinox," and it happens twice every year, around March 21 and Sept. 21. Just what is an equinox, and why does it occur?

The Earth moves in two different ways. First, the planet spins on its polar axis — a line through the north and south poles — once every 24 hours, causing the alternation of day and night. Secondly, it moves in its orbit around the sun once every 365.25 days, causing the annual cycle of seasons. The equinox occurs when these two motions intersect. [Season to Season: Earth's Equinoxes & Solstices (Infographic)]

Because the Earth is so big, its mass has an enormously powerful gyroscopic effect. For this reason, its poles always point in the same direction, although a major earthquake can cause tiny wobbles in this axis. Most importantly, the Earth's motion around the sun has absolutely no effect on the direction the poles are pointing, which has very important consequences for Earth's seasons.

Astronomers mark the positions of objects in the sky relative to the Earth's poles of rotation (those are the red lines you see in the picture). The most important line is the celestial equator, which divides the sky into the Northern and Southern Hemispheres.

The Earth's pole of rotation is tilted 23.4 degrees relative to the plane of its orbit. This tilt is always toward the same point in the sky, called the celestial pole, no matter where in its orbit around the sun the Earth happens to be.

This tilt makes it appear to observers on Earth's surface that the sun is moving across the sky at an angle to the celestial equator. This is marked by the green line in the image, called the "ecliptic" because eclipses happen along this line.

Twice a year, the sun crosses the celestial equator, moving from the Northern Hemisphere to the Southern Hemisphere, or vice versa. These two crossings are very important for the inhabitants of Earth, because they mark the change in the direction the sun's rays fall on Earth.

Specifically, on Sunday, the sun will move from the Northern Hemisphere to the Southern Hemisphere. It will pass overhead everywhere along the Earth's equator on that date, and the sun will rise exactly in the east and set exactly in the west. Day and night will also be of roughly equal length. ("Equinox" is derived from the Latin for "equal night.")

The sun will continue on its path southward for the next three months, reaching its southernmost point on Dec. 21, the date of the "solstice." In the Northern Hemisphere, the days will become shorter, the nights longer, and the temperatures colder during this three-month trek, all as a result of the sun's being south of the celestial equator.

It's always important to remember that this is part of a cycle, and that after Dec. 21 the sun will start moving northward again, and spring will be on its way.