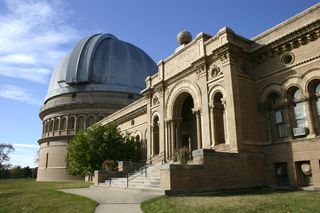 The observatory is a facility of the University of Chicago and is housed in an ornate Romanesque-style building located on a 77-acre park-like site near Lake Geneva, Wisconsin, about a two-hour drive northwest of downtown Chicago. It opened in 1897 and was closed to almost all activity in 2018.

The Yerkes refracting telescope was gigantic for its time, with a main tube that's 60 feet long (18 m). A refracting telescope is one of the two main types of astronomical telescopes. A refractor has the familiar spyglass design, which operates by gathering light through a large lens at one end of a long tube and focusing the light on an eyepiece, camera or other instrument at the opposite end. (The other type of telescope is the reflector, which uses a large mirror to gather light.) Including lenses, plus the usual attachments and other parts, the complete moving portion of the Yerkes telescope weighs 20 tons.

In 1892, George Ellery Hale, a University of Chicago professor, learned that America's premier telescope lens maker, Alvan G. Clark, had a pair of optically flawless glass disks, 42 inches (1.07 m) in diameter — perfect for the heart of the world's largest refracting telescope, but it would cost a pretty penny. With the help of William Rainey Harper, the University of Chicago president, Hale approached Charles T. Yerkes, a wealthy Chicago businessman, about funding a new, prestigious observatory, according to the University of Chicago Chronicle. Yerkes had financed Chicago's electric railway system years earlier.

"I don't care what the cost, send me the bill," Yerkes told journalists at the time. "I will spend a million dollars to lick the Lick." A few weeks later, Yerkes "exploded with rage" when told that the "bare necessities" for his observatory would cost $285,375 (about $8 million today), according to an article in the Boone County Journal. Nonetheless, Yerkes paid the bill.

Hale consulted a group of distinguished astronomers to select an observatory location free of pollution from smoke and electric lights, yet within 100 miles (161 kilometers) of Chicago, to keep a strong link with the university's main campus. A Chicago real estate speculator offered an expanse of land on the shores of Lake Geneva that fit the bill.

To build the telescope, the university engaged the same team that had built the Lick instrument: Alvan Clark & Sons for the lenses, and the Warner & Swasey Co. of Cleveland for the tube and mounting.

The dome housing the big telescope is 90 feet (27 m) in diameter, according to a pamphlet published by the observatory in 1920. The wooden floor surrounding the pier that supports the telescope is 75 feet (23 m) across and can be raised or lowered by an electric elevator so that astronomers can reach the eyepiece end of the telescope whether it is pointed high or low in the sky.

The observatory opened with a two-day dedication ceremony in October 1897 and served as the home of the University of Chicago's astronomy and astrophysics department until the 1960s.

From the beginning, Yerkes Observatory was designed to be more than a telescope in a dome; it was a comprehensive laboratory for astrophysical research. By 1920, the observatory had three additional telescopes whose capabilities complemented those of the big refractor, as well as an array of laboratory instruments for analyzing light and measuring photographs.

Yerkes Observatory has contributed to numerous scientific discoveries throughout the 20th century. Here are a few highlights:

Astronomers at Yerkes were also responsible for founding the American Astronomical Society and the respected Astrophysical Journal.

In more recent years, astronomers at Yerkes developed the HAWC (High-resolution Airborne Wideband Camera) to fly on NASA's SOFIA (Stratospheric Observatory for Infrared Astronomy) aircraft as well as the ARC Echelle Spectrograph, an instrument designed to precisely measure many wavelengths of light simultaneously, for the Apache Point Observatory in New Mexico.

Among the treasures at Yerkes are 170,000 glass photographic plates taken with the 40-inch refractor and the other telescopes starting in the early 1900s and continuing through the century. Astronomers can review this collection for parallax measurements, or any other research that might make use of a photograph of a particular area of the sky as it appeared years ago. Historical parallax work done at Yerkes helped prepare for the Sloan Digital Sky Survey, a multiyear project using a telescope in New Mexico to map the locations of millions of galaxies outside our Milky Way.

In its later years, as research moved to newer telescopes, Yerkes turned to education. April Whitt, an educator based at the Adler Planetarium in the 1990s, recalled helping students from Chicago observe the motions of Jupiter's moons through the giant refractor. "They were so excited to see one of the moons pass behind Jupiter, then come back out on the other side a while later," she said.

One notable education project of Yerkes' later years was Project SEE (Space Exploration Experience) for students who are blind or visually impaired. The program included lessons on infrared light, which no one can see. A memorable experience for the students was to look through the 40-inch refractor and have the light of a star or planet fall on their retina, regardless of their degree of sight or blindness, a University of Chicago news release said.

However, the observatory's doors aren't closed forever.  "The University will continue to occasionally operate the telescopes at Yerkes to ensure the Observatory can continue to be used for research and education, and the large collection of glass photographic plates will continue to be available to researchers by appointment via the department of Astronomy and Astrophysics," the university's physical sciences division said on its website.

The university said that it is continuing discussions with interested parties, including residents of Williams Bay and descendants of Charles T. Yerkes, searching for long-term stewards of the observatory.