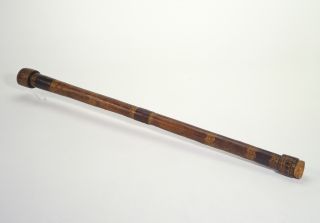 One of Galileo's first telescopes. He did not invent the telescope, but he did make several improvements and was the first to aim one at the stars.
(Image: © NASA)

The telescope is one of humankind's most important inventions. The simple device that made far away things look near gave observers a new perspective. When curious men pointed the spyglass toward the sky, our view of Earth and our place in the universe changed forever.

But who invented the telescope? The answer remains a mystery today. It was probably inevitable that as glassmaking and lens-grinding techniques improved in the late 1500s, someone would hold up two lenses and discovered what they could do.

The first person to apply for a patent for a telescope was a Dutch eyeglass maker named Hans Lippershey (or Lipperhey). In 1608, Lippershey laid claim to a device that could magnify objects three times. His telescope had a concave eyepiece aligned with a convex objective lens. One story goes that he got the idea for his design after observing two children in his shop holding up two lenses that made a distant weather vane appear close. Others charged at the time that he stole the design from another eyeglass maker, Zacharias Jansen.

Jansen and Lippershey lived in the same town and both worked on making optical instruments. Scholars generally argue, however, that there is no real evidence that Lippershey did not develop his telescope independently. Lippershey, therefore, gets the credit for the telescope, because of the patent application, while Jansen is credited with inventing the compound microscope. Both appear to have contributed to the development of both instruments.

Compounding the confusion, yet another Dutchman, Jacob Metius, applied for a patent for a telescope a few weeks after Lippershey. The government of the Netherlands eventually turned down both applications because of the counterclaims. Also, officials said, the device was easy to reproduce, making it difficult to patent. In the end, Metius got a small reward, but the government paid Lippershey a handsome fee to make copies of his telescope.

In 1609, Galileo Galilei heard about the "Dutch perspective glasses" and within days had designed one of his own — without ever seeing one. He made some improvements — his could magnify objects 20 times — and presented his device to the Venetian Senate. The Senate, in turn, set him up for life as a lecturer at the University of Padua and doubled his salary, according to Stillman Drake in his book "Galileo at Work: His Scientific Biography" (Courier Dover Publications, 2003).

Galileo was the first to point a telescope skyward. He was able to make out mountains and craters on the moon, as well as a ribbon of diffuse light arching across the sky — the Milky Way. He also discovered the rings of Saturn, sunspots and four of Jupiter's moons.

Thomas Harriot, a British ethnographer and mathematician, also used a spyglass to observe the moon. Harriot became famous for his travels to the early settlements in Virginia to detail resources there. His August 1609 drawings of the moon predate Galileo's, but were never published.

The more Galileo looked, the more he was convinced of the sun-centered Copernican model of the planets. Galileo wrote a book "Dialogue Concerning the Two Chief World Systems, Ptolemaic and Copernican" and dedicated it to the Pope Urban VIII. But his ideas were considered heretical, and Galileo was called to appear before the inquisition in Rome in 1633. He struck a plea bargain and was sentenced to house arrest, where he continued to work and write until his death in 1642.

Elsewhere in Europe, scientists began improving the telescope. Johannes Kepler studied the optics and designed a telescope with two convex lenses, which made the images appear upside down. Working from Kepler's writings, Isaac Newton reasoned it was better to make a telescope out of mirrors rather than lenses and built a reflecting telescope in 1668. Centuries later the reflecting telescope would dominate astronomy.

The largest refracting telescope (one that use lenses to gather and focus light) opened at Yerkes Observatory in Williams Bay, Wisconsin, in 1897. But the 40-inch (1 meter) glass lens at Yerkes was soon made obsolete by larger mirrors. The Hooker 100-inch (2.5 m) reflecting telescope opened in 1917 at Mount Wilson Observatory in Pasadena, Calif. It was there that the astronomer Edwin Hubble determined that the Andromeda Nebula was indeed (as some astronomers had argued) a galaxy far, far away (2.5 million light-years) from the Milky Way.

With the development of the radio, scientists could start to study not just light, but other electromagnetic radiation in space. An American engineer named Karl Jansky was the first to detect radio radiation from space in 1931. He found a source of radio interference from the center of the Milky Way. Radio telescopes have since mapped the shape of galaxies and the existence of background microwave radiation that confirmed a prediction in the Big Bang Theory.

Here are some of the more famous telescopes:

This telescope launched in 1990. Some of Hubble's major contributions include determining the age of the universe with more precision, finding more moons near Pluto, doing observations of galaxies in the young universe, monitoring space weather on the outer planets, and even observing exoplanets — a situation not anticipated for the telescope as the first major exoplanet discoveries didn't happen until the mid-1990s.

A flaw in its mirror was fixed with an upgrade from a space shuttle crew in 1993. Hubble underwent five servicing missions by shuttle crews, with the last one being in 2009. It remains in good health to this day and is expected to overlap some observations with the James Webb Space Telescope (Hubble is part of a set of four "great observatories" launched by NASA in the 1990s and 2000s. The other members included the Spitzer Space Telescope, the Compton Gamma Ray Observatory and the Chandra X-Ray Observatory, which made many discoveries of their own.)

This is the successor to Hubble, and its launch date has been delayed several times over the years, with the latest estimate now for 2020. Unlike Hubble, this telescope will be parked far from Earth and out of reach of repair crews. Its science will look at four major themes: the universe's first light, how the first galaxies were formed, how stars are formed, and looking at the origins of life (including exoplanets).

This planet-hunting machine has found more than 4,000 potential planets since first launching in 2009. Initially, it focused on a section of the Cygnus constellation, but in 2013 problems with pointing consistently created a new mission in which Kepler moves between different regions of the sky. One of Kepler's major contributions is finding more super-Earths and rocky planets, which are harder to spot near bright stars.

This telescope in Chile has 66 receivers and its specialty is looking through the dust in young planetary systems (or through dusty stars and galaxies) to see how cosmic objects are formed. It was fully operational as of 2013. ALMA is unique in its sensitivity because it has so many receivers available. Some of its results include the clearest-ever image of the star Betelgeuse, and precise measurements of black hole masses.

This observatory has been operating since 1963, and is famous for many radio astronomy studies. The Puerto Rican telescope is also know for a message called the Arecibo Message that was directed at the globular cluster M13 in 1974. The observatory was damaged during a 2017 hurricane that devastated Puerto Rico. In popular culture, Arecibo was also the location of the climax of the 1995 James Bond film "Goldeneye", and it appeared in the 1997 movie "Contact."

This is a set of 27 telescopes located in the New Mexico desert. Construction began on the VLA in 1973. Some of the VLA's major discoveries include finding ice on Mercury, peering into the dusty center of the Milky Way, and looking at the formation of black holes. The telescope array also was prominently featured in the 1997 movie "Contact" as the site where a purported extraterrestrial signal arrived.

The twin telescopes at the W.M. Keck Observatory in Hawaii are the largest optical and infrared telescopes available. The telescopes started their work in 1993 and 1996. Some of their major discoveries including finding the first exoplanet "transiting" across its parent star, and learning about star movements in the nearby Andromeda Galaxy.

The Palomar Observatory, located in San Diego County, Calif., began work in 1949. The telescope is best known for discovering the small worlds Quaoar, Sedna and Eris in the Kuiper Belt, but its work also includes discovering supernovas (star explosions), tracking asteroids and looking at gamma-ray bursts.