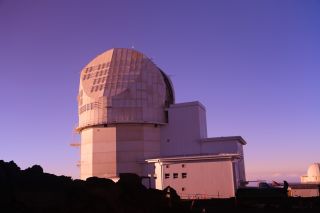 The Daniel K. Inouye Solar Telescope (DKIST) is a relatively new astronomical observatory built on the Hawaiian island of Maui to monitor our parent star. With a 13-foot (4 meters) primary mirror, the DKIST is the largest and most capable solar telescope in the world.

Over its planned lifetime, the DKIST will attempt to answer some of the biggest questions about the sun, such as why the sun's outer atmosphere, or corona, is far hotter than its visible surface, and what are the exact nature and origin of powerful blasts known as coronal mass ejections. If these explosions reach Earth, they can affect satellites and power grids, causing potentially catastrophic blackouts.

In 2010, the National Science Foundation awarded a $298 million contract to the Association of Universities for Research in Astronomy to construct the DKIST atop the 10,062-foot (3,067 m) Mount Haleakalā on Maui, according to a statement from the National Solar Observatory (NSO). At first, the facility was known as the Advanced Technology Solar Telescope, but it was renamed for the late Hawaiian senator Daniel K. Inouye in December 2013, according to a statement from the National Science Foundation.

The observatory faced opposition to its construction. Haleakalā, which means "house of the sun" in Hawaiian, is a sacred site for native Hawaiians. In 2015 and 2017, hundreds of protesters gathered to block vehicles from traveling to the top of the peak, similar to the more recent outcry over the Thirty Meter Telescope on nearby Mauna Kea.

As a consequence, the telescope's officials have met twice a year with a working group of native Hawaiians, and the peak remains open to native Hawaiians who wish to practice their religion on its slopes. NSO representatives have also developed sun-centered middle-school curricula that highlight Hawaii's long history of astronomy.

While weathering these controversies, the DKIST's main dome was finished in 2016, and its large mirror arrived the next year, according to Science magazine. In December 2019, the telescope began its observations, and in January 2020, operators released its spectacular first close-up images of the sun, showing roiling convection cells on the surface.

Although it was already collecting data, the DKIST wasn't quite complete yet. For those initial images, only a single instrument was operational: the Visible Broadband Imager, which takes extremely high-resolution images of the solar surface and lower atmosphere. A second instrument, the Visible Spectro-Polarimeter, which splits the sun's light into its components like a prism, came online shortly thereafter.

"The real power in the Inouye Solar Telescope is its flexibility, its upgradability," Dave Boboltz, the program director for the National Science Foundation Astronomy Division, said during a news conference in January 2020. "It's like having a Swiss Army Knife to study the sun."

The facility is meant to operate for at least 44 years, watching the sun go through multiple 11-year solar cycles, in which the star oscillates between periods of high and low activity. Scientists hope that, over the decades, the DKIST will help us understand much more about what it's like to live next to a giant and powerful entity like the sun.