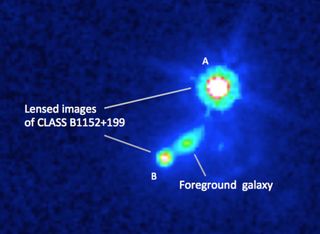 Astronomers have detected the magnetic field of a galaxy located a whopping 5 billion light-years from Earth.

"This finding is exciting," Sui Ann Mao, an astronomer from the Max Planck Institute for Radio Astronomy in Germany, said in a statement. "It is now the record holder of the most distant galaxy for which we have this magnetic-field information."

Mao led the team that made the find. The researchers used the Karl G. Jansky Very Large Array, a radio telescope network in New Mexico, to detect and characterize the magnetic field of the distant galaxy. [Top 10 Strangest Things in Space]

They found that the field is similar in strength and configuration to that of the Milky Way, even though the scrutinized galaxy is 5 billion years younger than our own.

"This means that magnetism is generated very early in a galaxy's life by natural processes, and thus that almost every heavenly body is magnetic," study co-author Bryan Gaensler, a professor at the Dunlap Institute for Astronomy & Astrophysics at the University of Toronto, said in the same statement. "The implication is that we need to understand magnetism to understand the universe."

Measuring the magnetic fields of other galaxies that are at different distances from Earth and are different ages can help astronomers better understand how cosmic magnetism evolves, study team members said. Since a faraway magnetic field can't be detected directly, astronomers rely on observations of the magnetic fingerprint left on light passing through the field. This imprint is also known as Faraday rotation.

The astronomers discovered a quasar — an incredibly bright galactic core powered by a supermassive black hole — located beyond the galaxy being studied, along the same line of sight. As the bright light from the quasar passes through the galaxy's magnetic field, it picks up the Faraday rotation fingerprint, providing astronomers with the information they need to learn more about the field's strength and direction, the researchers said.

"Nobody knows where cosmic magnetism comes from or how it was generated," Gaensler said in the statement. "But now, we have obtained a major clue needed for solving this mystery, by extracting the fossil record of magnetism in a galaxy billions of years before the present day.”

Their findings were published today (Aug. 28) in the journal Nature Astronomy.