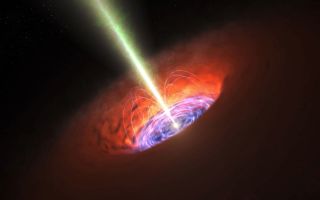 Astronomers have peeled away most of the gas and dust enshrouding a monster black hole, taking a close look at the giant that lies some 68 thousand light-years away.

A Swedish team of scientists has used the Atacama Large Millimeter/submillimeter Array (ALMA) — a huge radio telescope in Chile — to unmask a supermassive black hole's extremely powerful magnetic field. The team, led by Ivan Marti-Vidal from the Onsala Space Observatory and Chalmers University of Technology, was therefore able to peer deep into the heart of the distant galaxy where the black hole lies, and see the region just light-days away from the behemoth.

"Our discovery is a giant leap in terms of observing frequency, thanks to the use of ALMA, and in terms of distance to the black hole where the magnetic field has been probed," said co-author Sebastien Muller, also from Onsala Space Observatory and Chalmers University of Technology, in a statement. [The Strangest Black Holes in the Universe]

Supermassive black holes loom in the centers of the majority of massive galaxies. Some of these black holes, like the one in the Milky Way's center, lie dormant. Others (so-called quasars) actively chow down on gas, causing them to radiate like brilliant beacons of light. They can therefore be seen from across the universe.

Although these monsters clearly accrete huge amounts of matter, some material escapes. It's flung out into space at close to the speed of light in a jet of plasma. Astronomers don't understand the physical mechanism at play here, but think it has to do with a strong magnetic field close to the black hole itself.

Until now, only weak magnetic fields located several light-years from the black hole have been caught on camera via this twisting of light. But by looking at higher energies, like the ones visible with ALMA, astronomers can probe more powerful magnetic fields, which lie closer to their black hole counterparts.

"These results, and future studies, will help us understand what is really going on in the immediate vicinity of supermassive black holes,"  Muller said in the statement.