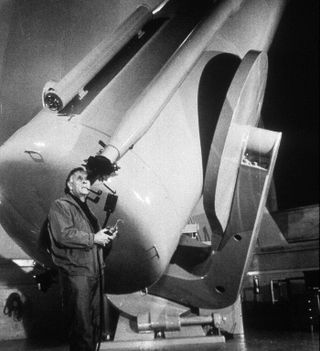 Edwin Hubble, credited with the discovery of the expansion of the universe, at the Mount Wilson Observatory
(Image: © : Mt. Wilson Archive, Carnegie Institution of Washington)

Often lauded as the father of modern cosmology, Edwin Powell Hubble made several significant discoveries that changed how scientists viewed the universe. Born in 1889, Hubble began his professional life as a lawyer, but returned to school after only a few years to obtain a doctorate in astronomy.

A life of service

After receiving his degree, Hubble was invited to work at the Mount Wilson Observatory in California, but had to delay his acceptance while he served as a soldier in World War I. Upon return to civilian life, he took a position at the observatory, where he was able to work with the two largest telescopes in the world, the 60-inch and 100-inch Hooker reflectors.

He left the observatory again in 1942 to serve in World War II, where he was awarded the Medal of Merit. Before his death in 1953, at the age of 63, he oversaw the construction of the 200-inch Hale Telescope on Palomar Mountain, which would be the largest telescope on Earth until the Russian BTA-6 was built in 1976.

Galaxies outside the Milky Way

In the 1920s, the small, diffuse patches in the sky were termed nebulae, and were thought to exist within the Milky Way. While examining images of NGC 6822, M33 and M31 individually, Hubble noticed a pulsating star known as a Cepheid variable inside each one. Cepheids are special because their pulsation allows for precise measurements of distance. Hubble calculated how far away each Cepheid lay — and thus how far to each nebula — and realized they were too distant to be inside of the Milky Way.

Astronomers realized that these nebulae were in fact galaxies like the Milky Way, each containing billions of stars. The universe, once thought to be contained by the Milky Way, expanded significantly in the eyes of astronomers.

Around the same time, Hubble published a standard classification system to use for the galaxies. At the time, a descriptive system existed, and two other systems were proposed soon after, but they were insufficient. Hubble's clear method of organizing the various classes focuses on three galactic types: ellipticals, spiral and barred spirals, and irregulars. Known as the “tuning fork” diagram (due to its resemblance to that musical piece), the method organizes ellipticals by their ellipticity (how stretched out they are from a perfect circle), while spirals and barred spirals become less tightly wound as they progress.

Hubble originally thought that galaxies evolved from ellipticals to spirals, but scientists now know that each galaxy's shape is determined in its early life.

In studying the various galaxies, Hubble was able to determine that they did not sit stationary in space. Instead, virtually every galaxy seems to be rushing away from Earth (the Andromeda Galaxy is instead rushing toward us and will collide with the Milky Way in about 5 billion years). Astronomers rushed to test his calculations on other galaxies, and found that some were moving as quickly as 90 million mph (40,000 kilometers per second) in the opposite direction.

Over a decade before Hubble published his work, renowned scientist Albert Einstein's theory of General Relativity called for an expanding universe. But Einstein removed the equations because they contradicted the evidence of the day. After Hubble had shown the universe was, in fact, expanding, Einstein visited him at Mount Wilson, calling his decision to change the equations, "the greatest blunder of my life."

Though Hubble is most well known for these major discoveries, he also made a number of other contributions to the field of astronomy, and received numerous awards. But he never received the Nobel Prize, despite his role in improving the existing understanding of the universe. During his lifetime, astronomy was considered a field of physics for the world-renowned Nobel Prize. Hubble labored in vain for a change that would allow astronomers such as himself to be recognized. Unfortunately, it didn't happen until 1953, the year Hubble died. Since the Nobel Prize cannot be awarded posthumously, Hubble was ineligible.

In 1990, 101 years after Hubble's birth, NASA launched the Hubble Space Telescope into orbit around Earth. The telescope, named for Edwin Hubble, has provided a wealth of information about the cosmos, transmitting hundreds of thousands of images. It has allowed for more precise calculations of the age of the universe, shown galaxies in all stages of the universe, and played a key role in the discovery of dark energy, the force causing the universe to expand.