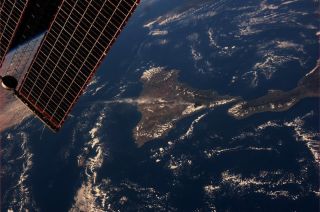 Mount Etna's latest burst of volcanic activity can be seen from space.

NASA astronaut Karen Nyberg spied a plume of ash from the volcano trailing over Sicily from her post aboard the International Space Station on Saturday (Oct. 26).

She posted a photo of the phenomenon on Twitter, writing: "Our view of Mount Etna erupting. October 26."

At 10,900 feet (3,329 meters), Italy's Mount Etna is Europe's tallest volcano and one of the world's most active. Though it is almost continuously spewing gas or lava, the last major eruption at Mount Etna was in 1992.

Mount Etna's latest spurt of activity over the weekend sent a bright stream of lava shooting into the air, while ash clouds could be seen across much of eastern Sicily, according to the BBC. The haze forced the nearest airport and airspace to close temporarily, but none of the mountain towns that surround the volatile peak had to be evacuated, the BBC reported.

Earlier this year, Nyberg's Canadian colleague, astronaut Chris Hadfield, snapped a picture of ash spewing from Mount Etna while he was on board the space station after one of the volcano's paroxysms (short, violent bursts of activity).

The International Space Station hovers around 240 miles (385 kilometers) above Earth, completing a full orbit of the planet every 90 minutes. Astronauts living inside the outpost often share their unique view of ephemeral events on the ground, from hurricanes and wildfires to northern lights and lightning storms.