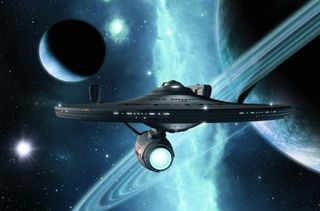 The iconic starship from 'Star Trek,' the U.S.S. Enterprise. Depiction from the Star Trek: The Video Game.
(Image: © Namco Bandai)

Astrophysicist Eric Davis is one of the leaders in the field of faster-than-light (FTL) space travel. But for Davis, humanity's potential to explore the vastness of space at warp speed is not science fiction.

TechNewsDaily recently caught up with Davis to discuss his new paper, which appeared in the March/April volume of the Journal of the British Interplanetary Society and will form the basis of his upcoming address at Icarus Interstellar's 2013 Starship Congress in August. [Super-Fast Space Travel Propulsion Ideas (Images)]

"The proof of principle for FTL space warp propulsion was published decades ago," said Davis, referring to a 1994 paper by physicist Miguel Alcubierre. "All conventional advanced propulsion physics technologies are limited to speeds below the speed of light … Using an FTL space warp will drastically reduce the time and distances of interstellar flight."

Before delving into Davis' study, here's a quick review of faster-than-light space travel:

According to Einstein's theory of special relativity, an object with mass cannot go as fast or faster than the speed of light. However, some scientists believe that a loophole in this theory will someday allow humans to travel light-years in a matter of days.

In current FTL theories, it's not the ship that's moving — space itself moves. It's established that space is flexible; in fact, space has been steadily expanding since the Big Bang.

By distorting the space around the ship instead of accelerating the ship itself, these theoretical warp drives would never break Einstein's special relativity rules. The ship itself is never going faster than light with respect to the space immediately around it.

The difference between the two is the way in which space is manipulated. With a warp drive, space in front of the vessel is contracted while space behind it is expanded, creating a sort of wave that brings the vessel to its destination.

With a wormhole, the ship (or perhaps an exterior mechanism) would create a tunnel through spacetime, with a targeted entrance and exit. The ship would enter the wormhole at sublight speeds and reappear in a different location many light-years away.

In his paper, Davis describes a wormhole entrance as "a sphere that contained the mirror image of a whole other universe or remote region within our universe, incredibly shrunken and distorted."

Mirror, mirror on the hull

The next question is: how to create these spacetime distortions that will allow vessels to travel faster than light? It's believed — and certain preliminary experiments seem to confirm — that producing targeted amounts of what's called "negative energy" would achieve the desired effect.

Negative energy has been produced in a lab via what's called the Casimir effect. This phenomenon revolves around the idea that vacuum, contrary to its portrayal in classical physics, isn't empty. According to quantum theory, vacuum is full of electromagnetic fluctuations. Distorting these fluctuations can create negative energy.

According to Davis, one of the most promising methods for creating negative energy is called the Ford-Svaiter mirror. This is a theoretical device that would focus all the quantum vacuum fluctuations onto the mirror's focal line.

"When those fluctuations are confined there, they have a negative energy," said Davis. "You could have types of negative energy that could make a wormhole that you could put a person through and, if you make a bigger mirror, put a starship through. The [mirror] is scalable … that's the beauty of it."

The concern there is how to target the wormhole's exit.

"We don't know the answer to that question yet," said Davis. "Einstein's theory of general relativity doesn't answer it."

That's the difference between the fields of physics and engineering, Davis explained. According to our current understanding of physics, targeting the wormhole's exit is possible, but engineers have yet to figure out how to achieve it. [See also: NASA Turns to 3D Printing for Self-Building Spacecraft]

"On screen, Number One."

Another issue addressed in Davis' paper is how to navigate an FTL starship.

"If you're in a wormhole, you don't go faster than light — you're going at normal speeds, but your visualization and stellar navigations are all gone [because] … there are no stars to navigate by."

The iconic image of stars streaking by a spaceship viewscreen popularized by franchises like "Star Trek" and "Star Wars" simply isn't accurate, said Davis. "The light that goes through the wormhole gets distorted … you're going to have a very weird visual display."

This is because the negative energy necessary to create a wormhole or warp drive creates a repulsive gravity that distorts light around the ship.

So ships moving at faster-than-light speeds will not be able to observe their surroundings to calculate their location. Astronauts will have to rely on sophisticated computer programs to calculate their probable location. "You'll need something on the order of a supercomputer equipped with parallel processing," said Davis. "[The computer is] going to have to do all the figuring out  … [using] input data from the last position and estimating."

This is more of a concern with warp drives, which are actively reshaping space as they travel, but not as much with traversable wormholes, whose entrances and exits will probably be preset before flight. "You can only go one way through the wormhole, so it's not like you're going to get lost," said Davis

It's also important for the computer to be able to produce some kind of visual representation of its flight plan and spatial location. These images would then be rendered and displayed in the starship's cockpit or bridge for the crew to see and study. "It'll help the human psychological need for understanding, in real time, what the position changes of the stars are going to look like," said Davis.

Where no one has gone before

At the heart of Davis' paper is the principle — supported by rigorous scientific theory — that faster-than-light travel is a real and even tangible possibility. The last section of the paper proposes nine "next steps" that would push the field toward engineering prototypes and other practical tests of faster-than-light theories.

These steps include creating computer simulations to model the structure and effects of space warps. Davis also calls for more rigorous exploration of the Ford-Svaiter mirror, which is still a largely theoretical device. The mirror is just one possible way to generate negative energy; further study is needed to determine whether there are any other practical methods of achieving the same effect. [See also: Hypersonic 'SpaceLiner' Aims to Fly Passengers in 2050]

Davis describes the development and implementation of space-warp travel as "technically daunting" in his paper, but in conversation, he said he has no doubt that faster-than-light travel will someday be not only possible, but necessary.

"The Earth is subjected to natural and outer space and ecological disasters, so life is too fragile, while the planets in the solar system are not very hospitable to human life. So we need to explore extrasolar planets for alternative homes," Davis said.

"This is all part of the growth and evolution of the human race."