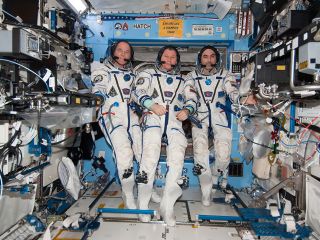 Kevin Ford, Oleg Novitskiy and Evgeny Tarelkin (left to right) are scheduled to return to Earth on Friday, March 14, 2013 after a stay on the International Space Station.
(Image: © NASA)

An American astronaut and two Russian cosmonauts are stuck in space for one more day after freezing rain and fog on Earth prevented them from landing in Central Asia on Thursday (March 14), NASA officials say.

The foul weather, which one Russian space agency official described simply as "horrible," means NASA astronaut Kevin Ford and cosmonauts Oleg Novitskiy and Evgeny Tarelkin had to delay their return from the International Space Station for at least 24 hours. The three men have been living in space for 141 days and were preparing to enter their Soyuz spacecraft for a landing on the frigid steppes of Kazakhstan tonight.

The rain and fog in Kazakhstan is not a threat to the Soyuz spacecraft and crew, Navias said. But the recovery helicopters essential for retrieving the astronauts after landing would not be able to make it to their staging grounds for the landing because of bad weather conditions. [See photos of the Expedition 34 space station mission]

"I talked to our colleagues in Kazakhstan last night and the weather is really horrible, and a decision was made not to risk, and we suggest that we delay the landing." chief Russian flight director Vlademir Solovyev said through a translator on NASA TV.

This is not the first time weather has affected a Soyuz spacecraft's landing. In 2009, another Soyuz craft had its return to Earth delayed by a day because snowy conditions on the ground made the landing potentially unsafe.

When Ford and his two crewmates depart the station, three other spaceflyers — Canadian astronaut Chris Hadfield, Russian Roman Romanenko and American Tom Marshburn — will remain aboard orbiting lab to await a new set of crewmembers.

That new crew will launch on March 28 to ferry cosmonauts Pavel Vinogradov, Alexander Misurkin and NASA astronaut Chris Cassidy to the space station.

NASA has relied on Russia's Soyuz crafts ferry astronauts between the Earth's surface and orbit since the retirement of the agency's shuttle program in 2011. Officials with the space agency hope to instead depend on privately built unmanned and crewed spacecraft to bring people and cargo to and from the space station.