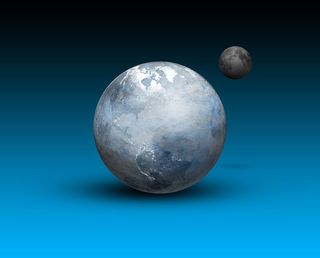 When ice possibly swathed the entire world, the oceans underneath may have nevertheless surprisingly churned, potentially helping to provide life with vital nutrients, new research suggests.

For decades, scientists have proposed that the planet may once have been a "Snowball Earth," with geological evidence suggesting ice reached all the way to the equator at least twice during the Neoproterozoic era (about 635 million to 750 million years ago) in stints lasting millions of years. The ice sheets blanketing Earth were not completely solid — there were likely many holes or thin patches around warm spots such as volcanoes — but in many other places, ice may have been more than a half-mile thick.

During these Snowball Earth periods, it is also thought that ancient life may have begun its drive toward explosive diversity. However, until now, little was done to model how water and nutrients might have flowed in the ice-capped oceans in which this primordial life dwelled. Past research did suggest that oceans might have flowed sluggishly due to ice shielding the waters from wind, and such relatively stagnant water would not have been as conducive to driving the developing diversity of primordial life in the oceans. But such studies failed to account for geothermal heat from the planet that could potentially drive ocean mixing, researchers said.

To simulate oceans during Snowball Earth times, a group of scientists developed a high-resolution 3D model of the oceans and continents during the Neoproterozoic. The simulation accounted for weak geothermal heat and about 3,300 feet (1 kilometer) of ice covering the land and oceans. The findings are detailed in the March 7 issue of the journal Nature.

Surprisingly, the researchers found the oceans were not stagnant pools during a Snowball Earth — rather, they were quite dynamic. [50 Amazing Facts About Earth]

"It's counterintuitive," said team member Daniel Schrag, a geologist at Harvard University. "Our assumption, and I think everyone else's, was that when you had ice keeping winds from mixing the oceans, you would end up with relatively stagnant oceans."

Geothermal heat would cause water at the ocean bottom to rise, triggering the kind of convection seen in pots of boiling water. In fact, water temperature and saltiness would have effectively been uniform across all depths nearly everywhere, a pattern completely different from that expected during any other period in Earth's history, researchers said.

"The ocean today is much more stratified — you have warm, buoyant water on top and cold, dense water on the bottom, and it resists mixing, although it does mix because of tides and winds," Schrag said. "In the snowball ocean, everything almost has the same density, so it takes much less energy to mix the oceans, and it turns out to mix very well."

In addition, powerful currents would have wrapped around the equator, and strong upwelling would have existed along the coasts. Unstable flows at the equator would have caused eddies that in turn would have generated jet streams reminiscent of those seen in the atmosphere of Jupiter, the researchers added. This circulation, including that of warm water, suggests melting rates near continents may have been as much as 10 times larger than previously estimated.

"You really have to think about Snowball Earth as being like a different planet," Schrag told OurAmazingPlanet. "Some criticisms people have made about the Snowball Earth hypothesis are based on assumptions of how the Earth worked that depend on how Earth works today. I think these findings are another nice example of how Snowball Earth was a very different planet, even though it's this planet. When you cover Earth with ice for so long, it changes many things you think are fundamental, including ocean circulation."

And all this churning might have helped provide life under the ice with a regular flow of nutrients.

"The ice-covered ocean was a pretty hard place to live — it's not a booming ecosystem," Schrag said. "This model makes us think harder about how nutrients would have mixed in the snowball, how oxygen and carbon might mix. It suggests there was really quite vigorous ocean-mixing."

Future research should investigate ancient rocks to look for evidence to test their model, Schrag added.