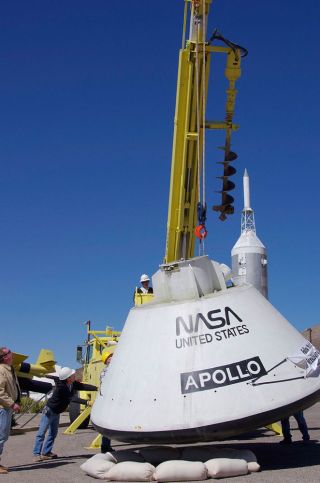 Workers settle an Apollo boilerplate capsule onto its bed of sand bags at the New Mexico Museum of Space History in Alamogordo.
(Image: © NMMSH)

When it comes to museum membership perks, a full-size spacecraft is hard to top.

Just such a benefit landed at the New Mexico Museum of Space History Friday (March 1), signaling the Alamogordo institution, a division of the New Mexico Department of Cultural Affairs, had become a Smithsonian Affiliate. The capsule, a metal mockup of the 1960's module that flew Apollo astronauts to the moon, is on loan to the museum from the Smithsonian's National Air and Space Museum in Washington, DC.

"The arrival of the Apollo boilerplate represents the first of many new artifacts and exhibits that the museum will be able to share with its visitors because of our Smithsonian Affiliation," Chris Orwoll, the museum's executive director, said in a statement.

The capsule's arrival was celebrated at a public ceremony and coincided with Governor Susana Martinez issuing a proclamation that March 1 would be New Mexico Museum of Space History Day, a free day for the state's residents.

"The Smithsonian Affiliations program will give the [space history] museum the opportunity to share with the citizens of New Mexico a wealth of scholarly expertise, exhibits, artifacts and educational materials from the Smithsonian's unparalleled collections," the governor's proclamation read in part. [Where Are America's Greatest Spaceships? (Infographic)]

New Mexico's new Apollo boilerplate capsule, known by its serial number 1207, was originally used to train Navy and Air Force personnel in the procedures for recovering the three-seater spacecraft following its return to Earth to splashdown in the ocean.

After the Apollo program ended, NASA donated the steel capsule to the Smithsonian Institution in December 1976. The boilerplate was then immediately loaned to a school district in Lake County, Fla., for display at a local science center. It was later moved to the nearby Ocala Discovery Science Center, where it sat on outdoors exhibit until late last month.

Boilerplate 1207 (BP-1207) made the 1,500 mile road trip from Ocala to Alamogordo strapped onto a flat bed truck. The capsule, which at some point was painted white and had the NASA "worm" logo and the words "United States" and "Apollo" applied to its side, embarked on the cross-country journey uncovered.

A banner affixed around its base invited those who saw the spacecraft to "Follow me to the New Mexico Museum of Space History."

Now positioned in its temporary parking spot outside the Alamogordo museum, its new curators are developing a restoration plan to be approved by the Smithsonian. After that work is done, the museum plans to move BP-1207 to a new concrete pad in front of its memorial park.

Of the thousands of museums located across the United States, only 177 are Smithsonian Affiliates. Together they represent 41 states, Puerto Rico and Panama.

"Being chosen as a Smithsonian Affiliate is a significant milestone for a museum and the New Mexico Museum of Space History is privileged to be among those chosen," New Mexico Cabinet Secretary Veronica Gonzales said in a statement.

The space history museum, as part of the cultural affairs department, is the first in the state system to become a Smithsonian Affiliate. Three other independent museums in New Mexico are also members.

Affiliates are selected for their record of presenting high quality exhibits, scholarship, professionalism and museum educational programs. In addition to the boilerplate, the New Mexico Museum of Space History also displays an Apollo-recovered moon rock, spacesuits and space food, a Little Joe II booster, and hosts the International Space Hall of Fame.

As part of its new affiliation, the museum will be offering its members additional benefits, including subscriptions to either Smithsonian or Air & Space magazine, personalized Smithsonian membership cards and opportunities for tours and travel.

Click through to collectSPACE.com to see more photos of the Apollo boilerplate capsule’s move from Florida to the New Mexico Museum of Space History.