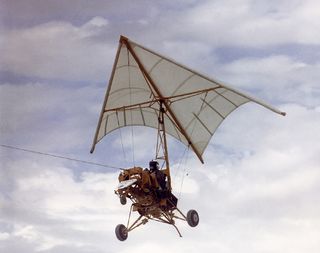 In this historical photo from the U.S. space agency, the Paresev experimental aircraft being towed in January of 1964.

A normal flight was a takeoff on the Rogers Dry Lakebed at Edwards Air Force Base and a circling flight path skirting the lake edges to insure a landing on the lakebed in the event of a towline failure. Release altitude was normally 10,000 to 13,000 feet. Data was obtained on the glide part of the flight. By maintaining simplicity during construction, it was possible to make control and configuration changes overnight and in many instances, in minutes.