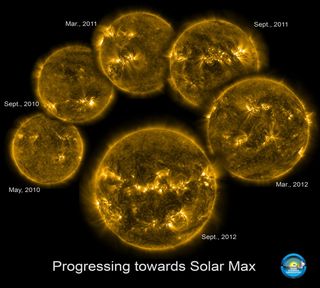 These six extreme UV images of the sun by NASA's Solar Dynamics Observatory track the rising level of solar activity as the sun ascends toward the 2013 peak of the current 11-year sunspot cycle, called Solar Cycle 24.
(Image: © NASA)

The sun is a constant star when compared with many others in the galaxy. Some stars pulsate dramatically, varying wildly in size and brightness and even exploding. In comparison, the sun varies in the amount of light it emits by only 0.1 percent over the course of a relatively stable 11-year-long pattern known as the solar cycle.

Still, "the light reaching the top of the Earth's atmosphere provides about 2,500 times as much energy as the total of all other sources combined," solar physicist Greg Kopp at the University of Colorado told SPACE.com. As such, even 0.1 percent of the amount of light the sun emits exceeds all other energy sources the Earth's atmosphere sees combined, such as the radioactivity naturally emitted from Earth's core, Kopp explained.

To learn more about how such tiny variations in solar energy might impact terrestrial climate, the National Research Council (NRC) convened dozens of experts in many fields, such as plasma physics, solar activity, atmospheric chemistry, fluid dynamics and energetic particle physics.

Many of the ways the scientists proposed these fluctuations in solar activity could influence Earth were complicated in nature. For instance, solar energetic particles and cosmic rays could reduce ozone levels in the stratosphere. This in turn alters the behavior of the atmosphere below it, perhaps even pushing storms on the surface off course. [Sun's Wrath: Worst Solar Storms Ever]

"In the lower stratosphere, the presence of ozone causes a local warming because of the breakup of ozone molecules by ultraviolet light," climate scientist Jerry North at Texas A&M University told SPACE.com.

These eddies feed the strength of jet streams, ultimately altering flows in the upper troposphere, the layer of atmosphere closest to Earth's surface. "The geographical positioning of the jets aloft can alter the distribution of storms over the middle latitudes," North said. "So the sun might have a role to play in this kind of process. I would have to say this would be a very difficult mechanism to prove in climate models. That does not mean it may not exist — just hard to prove."

In addition, climate scientist Gerald Meehl at the National Center for Atmospheric Research and his colleagues suggest that solar variability is leaving a definite imprint on climate, especially in the Pacific Ocean.

When researchers look at sea surface temperature data during sunspot peak years, the tropical Pacific showed a pattern very much like that expected with La Niña, a cyclical cooling of the Pacific Ocean that regularly affects climate worldwide, with sunspot peak years leading to a cooling of almost 1 degree Celsius (1.8 degrees Fahrenheit) in the equatorial eastern Pacific. In addition, peaks in the sunspot cycle were linked with increased precipitation in a number of areas across the globe, as well as above-normal sea-level pressure in the mid-latitude North and South Pacific.

Scientists have also often speculated whether the Maunder Minimum, a 70-year dearth of sunspots in the late 17th to early 18th century, was linked with the coldest part of the Little Ice Age, during which Europe and North America experienced bitterly cold winters. This regional cooling might be linked with a drop in the sun's extreme ultraviolet radiation. In fact, the sun could currently be on the cusp of a miniature version of the Maunder Minimum, since the current solar cycle is the weakest in more than 50 years.

"If the sun really is entering an unfamiliar phase of the solar cycle, then we must redouble our efforts to understand the sun-climate link," said researcher Lika Guhathakurta at NASA's Living with a Star Program, which helped fund the NRC study.

Although the sun is the main source of heat for Earth, the researchers note that solar variability may have more of a regional effect than a global one. As such, solar variability is not the cause of the global warming seen in recent times.

"While the sun is by far the dominant energy source powering our climate system, do not assume that it is causing much of recent climate changes. It's pretty stable," Kopp said. "Think of it as an 800-pound gorilla in climate — it has the weight to cause enormous changes, but luckily for us, it's pretty placidly lazy. While solar changes have historically caused climate changes, the sun is mostly likely responsible for less than 15 percent of the global temperature increases we've seen over the last century, during which human-caused changes such as increased greenhouse gases caused the majority of warming."

In the future, researchers suggested that to better understand how solar variability might affect the Earth, a future space observatory might include a radiometric imager. Such a device could essentially map the surface of the sun and reveal the contributions of each of its surface features to the sun's luminosity.

The solar disk is dotted by dark sunspots and bright magnetic areas known as faculae. Sunspots tend to vanish during low points in the solar cycle, and a radiometric imager could help reveal the links between prolonged spotlessness on the sun and Earth's climate.

Ancient signals of climate such as tree rings and ice cores might also help shed light on the link between the sun and climate. Since variations in Earth's magnetic field and atmospheric circulation might disrupt this evidence on Earth, a better long-term record of solar radiation might lie in the rocks and sediments of the moon or Mars, researchers added.

The scientists detailed their findings Jan. 8 in a report, "The Effects of Solar Variability on Earth's Climate," issued by the National Research Council.