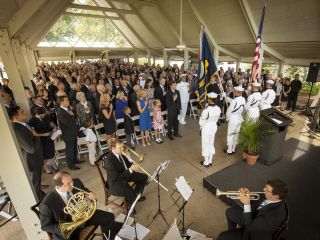 Members of the U.S. Navy Ceremonial Guard from Washington, D.C., present the Colors during a memorial service celebrating the life of Neil Armstrong, Friday, Aug. 31, 2012, in Cincinnati. Armstrong, the first man to walk on the moon during the 1969 Apollo 11 mission, died Saturday, Aug. 25. He was 82.
(Image: © NASA/Bill Ingalls)

The late astronaut Neil Armstrong, first man on the moon, was memorialized in ceremonies around the country on Friday (Aug. 31).

Armstrong, 82, passed away Aug. 25 due to complications resulting from cardiovascular surgery, which he underwent earlier this month.

In July 1969, Armstrong commanded Apollo 11, the first manned lunar landing mission. His first words upon setting foot on the moon were, "That's one small step for (a) man, one giant leap for mankind."

Armstrong's family, together with invited guests including the first moonwalker's fellow astronauts and the leadership of NASA, gathered at the Camargo Club in Cincinnati for a private memorial service on Friday morning.

The family's service was strictly invitation-only and closed to the press. The guest list was not released, but among those in attendance were Armstrong's two Apollo 11 crew mates Buzz Aldrin and Michael Collins, as well as Apollo astronauts Bill Anders, Dick Gordon, Jim Lovell and Gene Cernan. Mercury astronaut and former Ohio Senator John Glenn also attended with his wife Annie.

"Today, we pay tribute to a pioneering American; an explorer, a patriot and an individual who, with 'one small step,' achieved an impossible dream. Family, friends and colleagues of Neil's gathered to reflect on his extraordinary life and career, and offer thanks for the many blessings he shared with us along the way," said NASA Administrator Charles Bolden in a statement. "A grateful nation offers praise and salutes a humble servant who answered the call and dared to dream." [Neil Armstrong Memorial Service (Photos)]

U.S. Navy F/A-18 jets flew overhead in a "Missing Man" formation at the end of the service in honor of Armstrong's service as a naval aviator.

According to NASA, planning is underway for a national service to be held Sept. 12 in Washington, D.C., although no other details have been released.

The Kennedy Space Center in Florida also met around its moon rocket exhibit at the Apollo/Saturn V Center, where center director Robert Cabana led the remembrance.

President Barack Obama ordered flags be flown at half mast on the day Armstrong is interred, although when that will occur and where the late moonwalker will be laid to rest is not yet public.

Wink at the (blue) moon

Earlier this week, the Armstrong Air and Space Museum in the astronaut's hometown of Wapakoneta, Ohio held a public tribute, where attendees gathered to "wink at the moon," a gesture first suggested by Armstrong's family.

"For those who may ask what they can do to honor Neil, we have a simple request. Honor his example of service, accomplishment and modesty, and the next time you walk outside on a clear night and see the moon smiling down at you, think of Neil Armstrong and give him a wink," the family said in a statement.

In a coincidental bit of cosmic alignment, Friday is a "blue moon," or the second full moon of the month.

More tangible tributes are underway on television and in print.

The Discovery Channel is set to air "One Giant Leap: A Neil Armstrong Tribute," a new one-hour documentary, on Saturday at 8 p.m. EDT. The program includes footage from Armstrong's final public appearance and interviews with Apollo 11 crewmates Aldrin and Collins.

And Easton Press, which specializes in limited edition, leather-bound books, has partnered with LIFE magazine to publish a special 96 page photo retrospective. The book, "Neil Armstrong, 1930-2012," is set for release in October.

Armstrong's family has established the "Neil Armstrong New Frontiers Initiative," a memorial fund benefiting the Cincinnati Children's Hospital Medical Center. They have asked that in lieu of flowers, memorials be made to the Initiative, or to two scholarship funds setup in Armstrong's name by the Telluride Foundation and by the American Institute of Aeronautics and Astronautics (AIAA).

For more information about the Neil Armstrong scholarship and memorial funds, see neilarmstronginfo.com.