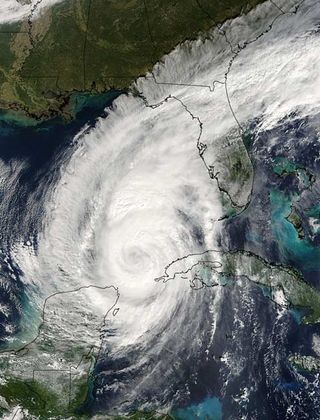 The Aqua satellite's MODIS instrument captured this image of Hurricane Wilma on October 23, 2005.
(Image: © NASA. Click on image to enlarge.)

NASA'sFlorida spaceport stood all but empty Monday, with only an emergency crew watchingover space shuttles and planetary probes while winds from Hurricane Wilma howledoutside.

The space agencyclosed its Kennedy Space Center (KSC) in Cape Canaveral as HurricaneWilma struck southwest Florida. By 11:00 a.m. EDT (1500 GMT) today, the stormhad weakened to a Category 2 hurricane - down from Category 3 at landfall -with maximum winds near 105 miles per hour (165 kilometers per hour).

At KSC,where most of NASA's 13,000 spaceport workers were advised to stay home, sustainedwinds were blowing at about 57 miles per hour (91 kilometers per hour) - orabout 50 knots - with heavy rain and stronger winds expected before 2:00p.m. EDT (1800 GMT), KSC officials said.

"It's avery rainy day here," said NASA's George Diller, a KSC spokesperson, in atelephone interview. "We can't see that it's gotten into anything yet."

A tornado,one of several spawned by Hurricane Wilma, touched down near KSC, but did notappear to damage the spaceport.

"Fortunatelyit's not moving toward any of our facilities," Diller said of the twister.

A smallcrew watched over NASA's three space shuttles - Discovery, Atlantis and Endeavour- which sat in their hangars with their payload doors closed to protect againstleaks, KSC officials said.

"There areno leaks in the hangars and the doors are sandbagged," Diller said, adding thatNASA's NewHorizons Pluto probe is safely stowed in its transportation canister. "ThePluto spacecraft is doing fine."

HurricaneWilma is the latest storm to force the closure of a NASA facility.

KSCofficials said they expect the spaceport to reopen Tuesday after HurricaneWilma has passed.