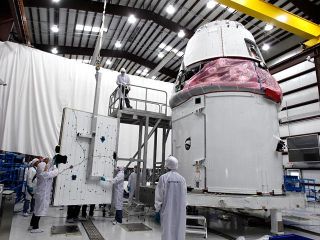 The first private spaceship launch to the International Space Station has been delayed, possibly by at least a week, the vehicle's makers announced today (April 23).

The commercial spaceflight company SpaceX was set to launch its Dragon capsule atop a Falcon 9 rocket April 30 from Cape Canaveral Air Force Station in Florida. The unmanned spacecraft will fly a demonstration mission for future cargo deliveries to the space station under an agreement with NASA.

Now, that liftoff will likely not occur until May 3 at the earliest, and most likely around May 7.

The Hawthorne, Calif.-based SpaceX, short for Space Exploration Technologies Corp., has been working to finish final testing and checkouts of its flight system, which will be the first privately built vehicle to rendezvous and dock with the orbiting laboratory.

"After reviewing our recent progress, it was clear that we needed more time to finish hardware-in-the-loop testing and properly review and follow up on all data," SpaceX spokeswoman Kirstin Brost Grantham wrote in an email. "While it is still possible that we could launch on May 3rd, it would be wise to add a few more days of margin in case things take longer than expected. As a result, our launch is likely to be pushed back by one week, pending coordination with NASA."

SpaceX is developing Dragon and Falcon 9 to carry cargo under NASA's Commercial Orbital Transportation Services (COTS) program, which aims to use commercial space taxis to replace the supply delivery services of the retired space shuttles.

While Dragon's initial flights will be robotically controlled, eventually SpaceX plans to fly people aboard the capsule. Ultimately, NASA hopes to use this and other private American vehicles to transport its astronauts to the station, instead of relying on Russian vehicles to do the job, as it is now.