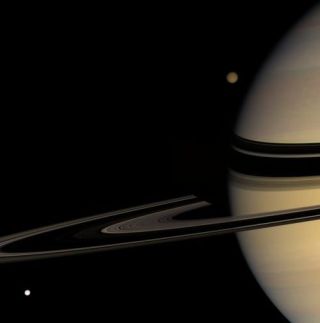 Titan emerges from behind Saturn while Tethys streaks into view in this colorful scene on March 24, 2008. Titan is 5,150 kilometers (3,200 miles) wide; Tethys is 1,071 kilometers (665 miles) wide. Saturn's shadow darkens the far arm of the rings near the planet's limb.
(Image: © NASA/JPL/Space Science Institute )

Each week this summer, Life's Little Mysteries, a sister site to SPACE.com, presents The Greatest Mysteries of the Cosmos, starting with the coolest stuff in our solar system.

The space around Saturn is a busy place. In addition to the planet's giant rings, more than 60 known moons zip about the world. Some moons actually orbit within the rings, which themselves are composed of countless grainy bits and boulder-sized "moonlets."

Overall, Saturn's brood of satellites is an intriguing, diverse bunch. Yet a few of these objects stand out from the pack. NASA's Cassini spacecraft, in orbit around ringed planet Saturn since 2004, buzzes these moons from time to time, and is helping solve some of their key mysteries, including:

A hot spot for alien life?

Despite being among the smallest spherical bodies in the solar system, Enceladus knows how to stir up a ruckus. In 2008, Cassini confirmed that geysers spew from weirdly warm cracks near the moon's south pole, creating streaks dubbed "tiger stripes." These watery jets suggest a subsurface reservoir of salty liquid. Cassini detected organic (carbon-containing) compounds, the building blocks of life, in the jets' plumes. [Photos: Saturn's Dazzling Rings and Moons]

A future lander mission could take a closer look for life without having to drill through miles and miles of surface material, as it would on Jupiter's moon Europa. From an exploratory viewpoint, "we think [Enceladus] is the most accessible habitable zone we have in our solar system," Porco told Life's Little Mysteries.

Scientists do not yet know exactly what powers Enceladus' geysers. But they do have a good idea where the sprays end up – the spaceborne particles form Saturn's diffuse and distant E ring.

Saturn's most famous moon is Titan, the second biggest moon in the solar system after Jupiter's Ganymede. At the outset, Titan has a couple key distinctions. First, it's the only moon that possesses a thick atmosphere, and second, it's the only place beyond Earth to have stable bodies of liquid on its surface. [Photos: Titan, Saturn's Largest Moon]

Rather than water, ethane and methane – which exists as a gas on Earth, but is liquid in Titan's -290 Fahrenheit (-179 degrees Celsius) environment – fill Titan's lakes and seas. Methane rains on Titan much like water does on our planet, eroding the moon's mountains and carving river-like channels. Volcanoes have also blasted the icy liquid forth on Titan, and might still.

A stew of organic chemicals exists in Titan's atmosphere, on the ground and in the lakes as well. Astrobiologists have suggested that alien life in the marine areas could feed on these compounds. [What Are the Ingredients of Life?]

In many ways, Titan resembles a deep-frozen version of an early Earth before life took hold. Scientists hope to unravel how Titan's climate and geology work, and in turn learn how our own planet operates.

"We have been able to see details on the surface of Titan that have shown that in its geological complexity and geographical diversity the surface environment is rivaled only by Earth itself," Porco said.

Another oddity orbiting Saturn: Iapetus. The moon has differently colored hemispheres – one light, the other dark – and a mountain chain some six miles (10 kilometers) high rises from much of Iapetus' equator.

The darkened hemisphere, scientists think, is probably a result of a couple of things. First, a farther-out moon called Phoebe shed some of its own dust. "Iapetus plows through this material, which darkens its leading side," said Porco. Then, once this hemisphere became slightly darkened, it soaked up more heat from the Sun. In turn, ice there evaporated, warming that side further still and making it even darker. Over time, this runaway thermal effect led to a two-toned moon.

As for the ridge, the best bet is that it’s a remnant of when Iapetus spun faster in its early days, then rapidly cooled, and in doing so locked in the equatorial bulge. But other researchers have argued that a small moon once orbited around Iapetus, broke up and formed a ring, and then collapsed onto the surface, could explain the weird midline bump.

Bonus boggler: A moon with rings?

Such a moon-ring might have precedent at Saturn's moon Rhea.

The detection of dust, plus a drop in the number of electrons on either side of the moon during a 2008 Cassini flyby, strongly suggested the presence of three thin rings. A line of deposited material near Rhea's equator also pointed to de-orbiting debris from rings.

Yet subsequent observations by Cassini have not turned up any visual signs of a ring system, Porco said. "The original data might mean there are little bits of material in orbit around Rhea, but not rings," said Porco. "We don’t know the answer."

Fans of "Star Wars" might start mouthing Obi-Wan Kenobi's line "That's no moon. It's a space station" when they get an eyeful of Saturn's moon Mimas. With its slate-gray color and a giant crater that resembles the dimple where the Death Star fires its superlaser, Mimas certainly looks like the planet-whacker.