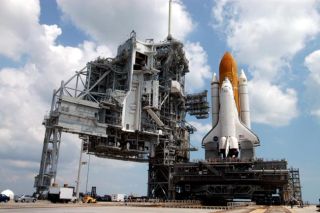 The space shuttle Discovery returns once more to Launch Pad 39B on June 15, 2005 in preparations for NASA's STS-114 spaceflight.
(Image: © NASA/KSC.)

With thespace shuttle Discovery and its cargo at the launch pad, the pieces are all butset for NASA's STS-114 mission, the agency's first orbiter flight in more thantwo years.

"It'sexciting to have both the shuttle and its cargo module at the pad," said NASAspokesperson Kylie Clem in a telephone interview. "It means we're that muchcloser to launch."

Discovery rolledout to Kennedy Space Center's Pad 39B on Wednesday, about two days after acargo canister delivered the Raffaello module and a pair of pallets carrying spacestation replacement parts and spacewalk components for the shuttle's STS-114mission.

NASA officialsplan to launch the STS-114 spaceflight no earlier than July 13 in what they hopewill be the first shuttle flight since the Columbia accident, which destroyedone orbiter and killed all seven STS-107 astronauts aboard during reentry onFeb. 1, 2003. Investigators later found that wing damage caused by externaltank foam debris at launch led to the loss of Columbia.

Shuttle officialshope that two years of modifications to NASA's external tanks and the orbitersthemselves will increase shuttle safety.

"Everyoneat United Space Alliance (USA) is excited to have Discovery back at the launchpad," said William Pickavance, vice president of Florida operations for the shuttlecontractor, in a written statement to SPACE.com."The NASA/shuttle team has worked hard to ensure that all the shuttle systemcomponents are safe and ready for flight and we believe we are there."

But accordingto an independent safety panel, there still remains work to do. NASA has notyet met threeof the 15 recommendations that Columbia investigators believed should befulfilled before the space agency launches its next orbiter, the panel saidlast week.

That panel,the Return to Flight Task Force chaired by former astronauts Thomas Staffordand Richard Covey, said more analysis is needed on NASA's efforts to eliminate harmfullaunch debris that could cause shuttle damage much like that seen duringColumbia's launch. Additional analysis into NASA's orbiter hardeningactivities, as well as the orbiter inspection and tile repair abilities werealso required, the task force said.

Meanwhile,NASA's continues to prepare for a July space shot for Discovery, with missionmanagers reportedly setting a tentative flight readiness review for the end ofJune.

"Thepayload is on track to be placed in the orbiter on Friday, which puts us onpace for the launch window of July 13 through 31," Pickavance said. "As of now,everything looks good for that July launch."

Discovery'sSTS-114 mission, which is designed to test new hardware and run throughpotential repair methods, is expected to be followed by a second mission,STS-121 aboard Atlantis, later this year. Both spaceflights are vital for the InternationalSpace Station, which hasn't received the any large cargo deliveries--or senthome any equally large shipments of unneeded equipment afforded by shuttlesupply modules like Raffaello--since December 2002.

"The spacestation needs a lot of supplies taken up for this mission and aboard the nextspace shuttle flight," Clem said. "But what is more important is the amount ofcargo [the shuttle] can bring back down."

NASA's threeremaining space shuttles can ferry much more material to and from the ISS thanRussian Soyuz spacecraft, the only vehicles currently transporting stationastronauts and their equipment to and from orbit.

Russia'sunmanned Progress spacecraft also perform periodic resupply missions to thespace station, but are designed to burn up during reentry. The next ISS cargoship, Progress 18, is scheduled to launch from the Russian Federal Space Agency'sBaikonur Cosmodrome in Kazakhstan later tonight, June 16, at 7:09 p.m. EDT(2309 GMT) and dock at the space station on June 18.