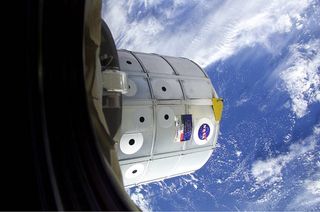 The Raffaello logistics module is backdropped over clouds and water on Earth during a 2001 shuttle flight aboard the Endeavour orbiter. The module will carry about 2,600 pounds of food and equipment to the International Space Station aboard Discovery during NASA's return-to-flight STS-114 mission.
(Image: © NASA/JSC.)

While NASA'snext astronaut crew prepares to launch spaceward aboard the spaceshuttle Discovery later this year, engineers and technicians are packing themission’s crucial cargo of fresh supplies and science equipment.

As part ofNASA’s first return to flight mission, Discovery’s STS-114spaceflight is bound for the International Space Station (ISS) to deliver food,tools and replacement parts that can’t be shipped to the orbitallaboratory any other way.

NASAengineers are filling the Raffaello multi-purposelogistics module (MPLM) – a sort of high-tech shipping container forspace station supplies – with cargo to be used by Expedition11 crewmembers Sergei Krikalevand John Phillips, who will be serving aboard the ISS when Discovery arrives.

“It’s a fairly light load for an MPLM because ofall the other things we’re flying on the mission,” saidNASA’s Scott Higginbotham, ISS mission manager for the STS-114 mission.

To enhance Discovery’s safety, shuttle engineers haveequipped the orbiter with a 50-foot (15-meter) boomto extend the reach of its shuttle arm, and a number of sensorsto track impacts along its wing leading edges.

“We’re [also] taking up a lotof tools and equipment in the mid-deck,” said veteran astronaut EileenCollins, STS-114 commander, during an orbiter check-out earlier this year.

Collinssaid Discovery will also carry enough food and other supplies to supportits crewmembers for a “period of time” aboard the ISS in the remotechance the orbiter suffer severe damage.

Discovery’sSTS-114 mission is currently set to launch no earlier than May 15 this year. Itis slated to be the first shuttle launch since the Feb. 1, 2003 loss ofColumbia and its crew. Since that accident, the ISS has depended on Russian Progresscargo ships for vital supply shipments.

Built bythe Italian Space Agency, Raffaello is one of fourcargo modules designed to ferry cargo to the ISS aboard space shuttles. Eachmodule is designed to hold 16 racks of cargo and fits inside theshuttle’s payload bay where it can be attached to the ISS, then emptiedfrom the inside.

Higginbothamsaid Raffaello will only carry 12 racks of supplies totalling about 2,600 pounds (1,170 kilograms) whenDiscovery launches toward the ISS.

But tuckedinside the module will be the Human Research Facility rack 2 (HRF-2), a sciencestation designed to boost biomedical research capabilities of the ISS. TheHRF-2 rack, which was packed into Raffaello earlierthis week, will be installed inside the station’s U.S.-built Destinylaboratory.

“Forme, one of the high points is the internal build up of the space station withnew laboratory equipment,” said Phillips, ISS Expedition 11 flightengineer, during an interview.

Discovery’screw will deliver one major piece of hardware that has been long-awaited byastronauts and managers working with the International Space Station.

A 620-pound(281-kilogram) device called a control moment gyroscope (CMG) will ride upaboard Discovery to be installed at the ISS during a spacewalk. The gyroscopewill replace a failed component and help keep the space station orientedproperly. STS-114 spacewalkers Soichi Noguchi andStephen Robinson will install the CMG during the second spacewalk of theirmission.

During theirthird extravehicular activity (EVA), the two astronauts will attach a1,522-pound (690-kilogram) platform to the exterior of the spacestation’s Quest airlock to hold on-orbit spare parts that will arriveaboard the next two shuttle flights, NASA officials said.

More space for the space station

While the Raffaello cargo will only be partially full at liftoff, theSTS-114 crew will spare no space loading it up for the return to Earth.

“We’rebringing back a lot of Russian hardware that is used for automateddocking,” Higginbotham said. “There are a lot of U.S. items that wewant to bring back either to repair and reuse again or to analyze andunderstand why they failed. “

Higginbothamsaid the cargo module will be stuffed with 5,200 pounds (2,358 kilograms) ofbroken or unused equipment, dirty clothes and other material that is currentlyclogging up space aboard the ISS.

NASAastronaut Michael Fincke, who served aboard the ISSfor six months during Expedition 9 mission, said returning the shuttle fleet toflight is critical for the U.S. to regain its space self-sufficiency.

“Thespace station is just full of things waiting to come back down to theplanet,” he told SPACE.com.