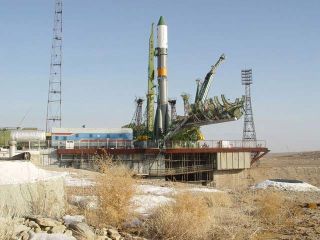 After two days of chasing its orbital quarry, a Russian supplyship successfully docked with the International Space Station (ISS) today on amission to deliver fresh food, clothes and other supplies to the two astronautsaboard.

"Congratulations," Russian flight controllers told the spacestation crew as Progress 17 docked in its Zvezda berth at the aft end of themodule.

Chiao and Sharipov are expected to complete seal checksbetween Progress 17 and the ISS around 5:30 p.m. EST (2230 GMT) and open thenew supply ship for the first time an hour later. They are currently scheduledto begin what will be a multiple-day unpacking job to empty Progress 17 onThursday.

Among the 2.3 tons of supplies aboard Progress 17 are 242pounds (109 kilograms) of oxygen and air, and 1,071 pounds (485 kilograms) ofwater. The spacecraft also contains about 86 pounds (39 kilograms) ofpropellant used to keep the space station in the proper orbit.

While the amount of consumables currently aboard the ISS arenowhere near the low levels seen when the last supply ship - Progress 16 - dockedat the station last year, NASA officials said Progress 17's payload alsoincludes additional supplies of air and food.

Included in the fresh delivery ship are 42 oxygen-generatingcandles that can be used to boost the station's air supply and 86 containerspacked with 160 days worth of food to add to the current ISS pantry stores.

When Progress 16 docked at the ISS on Dec. 25, 2004, foodsupplies were so low aboard the station that Chiao and Sharipov had altered theirdietsand were prepared to leavethe orbital laboratory empty if the cargo ship failed to reach the station.

Tucked inside Progress 17 are much needed spare parts forthe ISS, included new components for a Russian-built device that serves as the spacestation's prime oxygen generator.

The device, known as the Elektron, separates water into itscomponent oxygen and hydrogen through the process of electrolysis.

Over the last few months the unit's statushas flip-flopped between operational and non-functional, most recently earliertoday when the Elektron stopped working outright. Some troubleshooting effortsby Sharipov restored the unit, which has been drawing more power than normal aspart of an earlier fix.

Progress 17 also contains a heat exchanger unit for thestation's U.S. airlock that should allow the area to be used to staged futurespacewalks, as well as new cameras and lenses that will be used the Expedition10 crew's successors - Expedition 11's Sergei Krikalev and John Phillips - to photographthe Discovery orbiter's thermal protection tiles during NASA's first shuttlelaunch since the 2003 loss of Columbia.

Discovery is currently slated to launch in mid-May.

Using a Soyuz rocket, the Progress 17 spacecraft launchedfrom Baikonur Cosmodrome in Kazakhstan on Feb. 28 at about 2:09 p.m. EST (1909GMT) and reached orbit about 10 minutes later.

The cargo ship is the last delivery scheduled for Expedition10 before Chiao and Sharipov return to Earth in late April. The two men arrivedat the space station in October 2004 and have completed one of two planned spacewalksduring their mission.

Their final spacewalk, aimed at completing enhancements tothe ISS to ready it for a new European cargo ship, is currently planned forlate March.