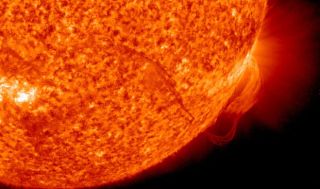 This image is a close-up on the snake-like solar filament arcing up from the sun as seen by NASA's Solar Dynamics Observatory on Nov. 17, 2010.
(Image: © NASA/SDO)

A huge snakelike tendril of magnetic plasma has appeared on the sun, extending hundreds of thousands of miles across the surface of our nearest star.

The solar filament was spotted Tuesday (Nov. 16) by cameras on NASA's Solar Dynamics Observatory, which stares at the sun continuously in different wavelengths. It is a mind-boggling 600,000 kilometers (just over 372,800 miles) long, according to the website Spaceweather.com.

Solar filaments are long threads of plasma that rise up into the sun's ultra-hot outer atmosphere, called the corona. These filaments are much cooler than the corona and appear to be dark with the sun's disk in the background. They can form dazzling prominences when viewed along the sun's curving horizon, called the limb.

The sun's new filament is winding around the sun's southwestern limb and could ultimately erupt into a solar storm or slip back into the sun's surface, according to Spaceweather.com, which monitors space weather and skywatching events.

"The filament has several options: relaxing gently back into the sun, snapping explosively, or crashing down upon the stellar surface," Spaceweather.com's Tony Phillips wrote in a Nov. 17 update. "Although an eruption from the area would likely not be Earth-directed, it could be very photogenic as tendrils of hot plasma fly into the black space above the edge of the sun."

In recent months, the sun has entered an active period of its 11-year solar weather cycle after an extended lull in activity.

Several powerful flares have erupted from the sun's surface in recent weeks. The Solar Dynamics Observatory and several other spacecraft keep constant watch on the sun to track solar weather activity.