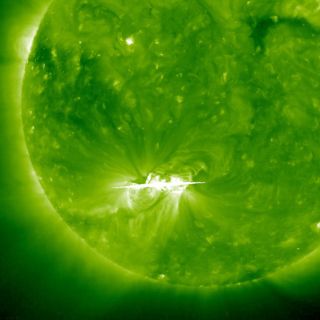 This image of the active sunspot group 1121 on the sun shows the solar hotspot as a bright white region in the lower left as seen by the sun-watching SOHO space observatory on Nov. 5, 2010.
(Image: © NASA/SOHO)

Amajor solar flare erupted from the sun Saturday ? one of themost powerful in years ? sending an energetic blast of X-rays from a hotspotofactivity that may still belch more solar storms in the days to come.

TheX-ray blast occurred Nov. 6 at about 11:36 EDT (1536 GMT) froman active group of sunspots called 1121. It was the third major flarefrom thesolar hotspot and registered a Class M 5.4 on the scale for sunstorms,accordingto the Space Weather PredictionCenter operated by NOAA. [PhotoofSunspot Group 1121]

"Astronomerswho study the sun have five categories offlares: A, B, C, M and X," explained SPACE.com's skywatching columnistJoeRao. "The M and X flares are the most potent types and the one thaterupted [Saturday] was an M 5.4 which is just about the most powerfulflarewe've seen in many years."

Atthe time of the flare, sunspot group 1121 was on the limb, orthe edge, of the sun's disk, so any cloud of electrified particlesejected bythe flare would not reach Earth, Rao said.

"Butas the sun rotates, this active region of the sun willbe turned more and more toward the center of its disk ? it will bethere aroundNov. 12 to 13," Rao said. "If a similar M-class flare erupts aroundthat time, we could be in line to see a very nice display of northernlights aday or two later when the cloud of electrified solar particles reachesEarth."

Accordingto the website Spaceweather.com, which monitors spaceweather and sky events, the radiation from the solar flare "createda waveof ionization in Earth's upper atmosphere that altered the propagationoflow-frequency radio waves."

Severesolar flare events can cripplesatellites and pose a risk to astronauts in orbit, and also have thepotentialto knock out power grids on Earth. NASA recently began a project,called the SolarShield,to provideearly-warning alerts to electricity providers to help limit damage topowerutility infrastructure as a result of extremely powerful solar storms.