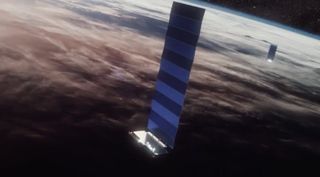 Of the 60 Starlink satellites launched in May, 45 have completed orbit raising, five are in the process of orbit raising, and another five are completing system checks.
(Image: © SpaceX)

Those three satellites will deorbit "passively," the spokesperson said, meaning Earth's gravity and atmospheric drag will pull them down until they burn up in the atmosphere.

Observers had noticed some Starlink satellites had not initiated orbit raising after being released May 23 from a Falcon 9 upper stage into a 440-kilometer low Earth orbit. SpaceX said May 31 that all 60 satellites were initially responsive.

SpaceX's spokesperson, in their June 28 statement, said the company will intentionally deorbit two functioning satellites as well, in order to test the spacecraft's ability to propulsively deorbit.

"Three satellites which initially communicated with the ground but are no longer in service, will passively deorbit," the spokesperson said. "Due to their design and low orbital position, all five deorbiting satellites will disintegrate once they enter Earth's atmosphere in support of SpaceX's commitment to a clean space environment."

SpaceX Founder Elon Musk stressed that the early Starlink satellites had a high risk of not working given the quantity of newly developed technology they carry.

"It's possible that some of these satellites may not work, and in fact [there's a] small possibility that all of the satellites will not work," he said during a May 15 call with reporters. "But these are a great design and we've done everything we can to maximize probability of success."

SpaceX sought and received approval from the U.S. Federal Communications Commission to operate a portion of its megaconstellation in a 550-kilometer orbit instead of its originally planned 1,150-kilometer altitude. The lower orbit means the satellites will deorbit within five years without propulsion, according to SpaceX.

The 60 satellites SpaceX launched in May are not the final design for its constellation of up to 12,000 satellites. The satellites lack inter-satellite links expected for future generations, and have some dissimilar features so that the company can test different technologies.

The spokesperson said SpaceX will use the early Starlink satellites to tests signal speed and capacity by "streaming videos and playing some high bandwidth video games using gateways throughout North America."

SpaceX says having satellites at 550 kilometers means it can achieve latencies of around 15 milliseconds, a noticeable difference between geostationary satellites that can have around half a second or more of signal lag.

SpaceX claims to be the first among the 11 participants in the Federal Communications Commission's Ku-Ka-band spectrum processing round to have Ku-band non-geosynchronous satellites operating over the United States. SpaceX told the FCC in a June 12 letter that being first means the company met conditions to have first choice in the U.S. for Ku-band "home base" radio frequencies in the event of in-line interference with another non-geosynchronous satellite operator.