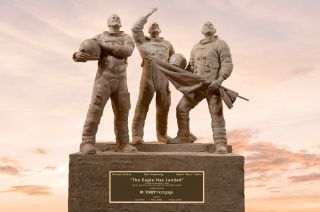 A new monument to the crew of the first moon landing will rise from the mission's launch site as the gift from an aptly-named financing company.

Rocket Mortgage by Quicken Loans has partnered with Kennedy Space Center Visitor Complex to erect a bronze statue of Apollo 11 astronauts Neil Armstrong, Buzz Aldrin and Michael Collins. The monument, to be installed this summer, will be the focal point of a new garden outside the display of a Saturn V moon rocket at the Florida spaceport.

"NASA's accomplishment of putting a man on the moon showed our country and the world that once seemingly 'impossible' barriers can be broken," said Jay Farner, CEO of Quicken Loans, in a statement. "Rocket Mortgage is proud to be a part of [the 50th anniversary] honoring these brave pioneers [who] journeyed to the great unknown and forever reshaped world history."

The 7-foot-tall (2.1-meter) statue, set atop a 4-foot-tall (1.2 meter) concrete base, is being created by sculptors George and Mark Lundeen of Lundeen Sculpture in Loveland, Colorado. The monument depicts Collins, Armstrong and Aldrin, each in their Apollo spacesuits, looking up to the sky. Collins and Armstrong are carrying their helmets, while Aldrin holds an American flag.

"We were under a very tight deadline for this. Start to finish on this project was going to be about six months," said Mark Lundeen. "Most of the time when I am asked for a sculpture, I usually ask for nine months to a year to do one figure, let alone three."

The monument was originally proposed by documentary filmmaker Steven Barber, who was inspired by seeing another of Mark Lundeen's works, a statue of Apollo 13 astronaut Jack Swigert that stands in the U.S. Capitol National Statuary Hall in Washington. (A duplicate of the statue is at Denver International Airport.)

"A project like this always takes a great team to put it all together," said George Lundeen. "When I first heard that Rocket Mortgage was coming onto this project, I thought what a perfect team we're going to have making these astronauts for the 50th anniversary."

"We worked with them all the way," he said. "Rocket Mortgage has been a great partner and a teammate."

The Lundeens' Apollo 11 statue will be erected at the center of a new "Moon Tree" garden planted outside Kennedy Space Center's Apollo/Saturn V Center. The garden will include 12 trees grown from seeds that were flown to the moon aboard the Apollo 14 mission in 1971.

The 12 trees in the Moon Tree garden are intended to represent each of the 12 crewed Apollo missions.

"We are grateful to Rocket Mortgage for bringing this commemorative statue to Kennedy Space Center Visitor Complex as we prepare to mark one of the most important anniversaries in the history of the United States space program," said Therrin Protze, chief operating officer of the visitor complex, in a statement. "The dynamic statue is indeed the perfect tribute to these early pioneers who forever changed the history of space and interplanetary travel."

The installation of the monument and Moon Tree garden are among a number of exhibit additions and events planned for the 50th anniversary of Apollo 11. At the Apollo/Saturn V Center, other changes include a new projection mapping set against the side of the Saturn V rocket and updates to the displays of an Apollo command and service module and original lunar module.

Kennedy Space Center Visitor Complex will open the reimagined Apollo/Saturn V Center — including its new monument to the Apollo 11 crew — on July 15. The next day, on the 50th anniversary of the mission's launch, visitors will be able to view original footage of the liftoff. A July 20 "extravaganza" will mark the lunar landing and a final "welcome home" event on July 24 is planned to commemorate the day the Apollo 11 astronauts returned to Earth.

Click through to collectSPACE to watch a video about the new Apollo 11 astronaut statue.