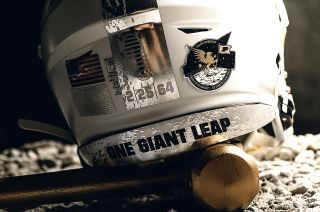 The numbers on the Purdue Boilermakers' Homecoming helmet stripe — 2, 25 and 64 — represent Purdue University moonwalkers, astronaut alums and space missions flown by the school's graduates. Nearly a third of all U.S. spaceflights have included a Purdue alumni.
(Image: © Purdue University)

Purdue University's football team is space-suiting up for the school's Homecoming game, donning special moon landing-themed helmets and patches to honor the 50th anniversary of NASA's Apollo 11 mission and Purdue's legacy as the "Cradle of Astronauts."

The Boilermakers will take to the field in West Lafayette, Indiana on Saturday (Oct. 12) wearing white jerseys, white pants and grey gloves to complement their new spacesuit-inspired helmet. The team's headgear will be fronted by a chrome gold mask evoking an astronaut's reflective visor, and will feature a grey and white moon pattern as a tribute to Purdue's two moonwalking alums, Neil Armstrong and Gene Cernan, the first and last (to date) astronauts to stand on the lunar surface.

A silver stripe running down the helmet's center reproduces Armstrong's boot print as a further nod to the late Apollo 11 commander. Three numbers at the base of the stripe — 2, 25 and 64 — represent Armstrong and Cernan, Purdue's astronaut alumni and the space missions flown by the school's graduates.

"Purdue upholds the 'Cradle of Astronauts' tradition, graduating 25 astronauts, including the first and most recent people to walk on the moon," the school stated in a press release. "Nearly a third of all U.S. spaceflights have included a Purdue graduate, while 10 missions have included multiple."

The astronauts are also slated to speak to Purdue classes, visit local schools and tour the university's campus.

The Boilermakers' Homecoming uniforms will also be adorned with a "Cradle of Astronauts" embroidered patch and matching decal, marking Purdue's "150 Years of Giant Leaps." The sticker, affixed to the helmet, and patch, sewn to the jersey, depicts the Griffin from Purdue's crest planting the school's flag on the moon.

The Purdue Team Store is offering a miniature of the Boilermakers' moon-inspired helmet that includes the chrome gold face mask and boot print center stripe. The shop is accepting pre-orders for the $40 collectible, which will ship after Saturday's Homecoming game.

Click through to collectSPACE to see the Purdue Team Store’s mini moonwalk helmet.