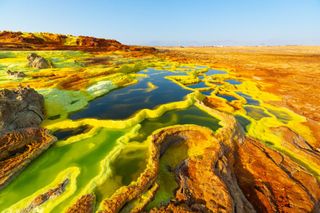 Unearthly greens and yellows color the scorching-hot landscape surrounding the Dallol volcano in northern Ethiopia. This alien-like world is filled with hydrothermal pools that are some of the most extreme environments on the planet — and some of them seem to be completely devoid of life, according to a new study.

Different life-forms on our planet have adapted to survive under some pretty harsh conditions, places that are superhot, superacidic or supersalty, to name a few, said study senior author Purificación López-García, the research director at the French National Centre for Scientific Research.

But can life survive in a single environment that combines all three conditions, such as in the colorful waters of the Dallol hydrothermal region?

Related: 7 Most Mars-Like Places on Earth

To figure out if this extreme environment oversteps the limits for life on our planet, the researchers sampled a number of brines— or pools of water with high concentrations of salt — in the area. Some were extremely hot, salty and acidic, while others were still very hot and salty but weren't too acidic or basic. The scientists analyzed all the genetic material found in the samples to identify any organisms living there.

Some of the milder pools were chock-full of sodium chloride, a condition that some tiny organisms can withstand; the more extreme environments had high concentrations of magnesium-based salt, which is "deleterious for life," because magnesium breaks down the cell membrane, López-García said.

In these most extreme environments, that were really acidic, hot and contained magnesium salts, the researchers found no DNA and thus no trace of a living organism, the study said. The scientists did detect a small hint of DNA from single-celled organisms called archaea if they "forced the conditions" in those samples, López-García said. That means they took the sample and kept amplifying the DNA — imagine zooming into a picture —  to see if there was a very small quantity that they'd missed. But the researchers hypothesized that this small amount of DNA is likely the result of contamination from a neighboring salt plain, brought from people who visit the area or wind.

On the other hand, in the less extreme ponds, the researchers found a large diversity of microbes, again mostly archaea. "The diversity of archaea is really very, very large and very surprising," López-García said. Researchers found some archaea that are well known to live in areas of high salt concentration and some that the scientists had no idea could survive in even the relatively less-salty ponds.

Their findings suggest that there is a gradient of extreme environments, some of which harbor life and others that don't and might serve as a bit of a caution in the search for life elsewhere in the cosmos, she added. "There is this idea … that says any planet with liquid water on the surface is habitable," she said. But as the lifeless pools of Ethiopia may suggest, water "might be a necessary condition, but it is far from sufficient."

What's more, using electron microscopes, the researchers also detected the presence of biomorphs or "mineral precipitates that can mimic tiny cells" in samples taken from both the lifeless pools and those found to harbor life, López-García said. "If you go to Mars or to fossil environments and you see little, rounded things, you might be tempted to say that these are microfossils, but they might not be."

There were some weaknesses in this study, John Hallsworth, a lecturer at The Institute for Global Food Security at Queen's University Belfast in Northern Ireland wrote in an accompanying commentary published in the journal Nature Ecology & Evolution. For example, the researchers' DNA analysis couldn't determine if the detected organisms were alive or active, and it's unclear if their measurements of the water factors such as pH were done accurately, he wrote.

Even so, the team "managed to characterize the geochemistry and microbial diversity of a large number of brines that span a wide range of physicochemical conditions, revealing the extensive diversity of the archaeal communities present," Hallsworth wrote.

What's more, a couple of months ago, another group of researchers came up with the opposite conclusion after they, too, sampled the waters in the Dallol area. In the most extreme ponds of the area, those researchers found that archaea were "thriving," and various types of analysis suggested that these microorganisms didn't originate from any type of contamination, said Felipe Gómez, a biochemist at Spain's Center of Astrobiology and the lead author of that study, which was published in May in the journal Scientific Reports.

"Given the risk of detecting any type of contamination, microbiologists that work in extreme environments take many precautions to avoid it," he said. "In our work, we sampled in completely aseptic conditions," or those free from contamination. It's unclear why there is a discrepancy between the studies, and though "they claim that they do not see what we report," that doesn't mean the older findings are incorrect, he said. "More work needs to be done."

But this older paper is "weak" because the researchers only found traces of one type of archaea that's similar to archaea living in the neighboring salt plain, and didn't do enough to prevent contamination, López-García said.

"Dispersal is active in the area," so this trace of archaea could have been carried in by the wind or tourists, similar to how her team also discovered traces of archaea but hypothesized that they were contaminants from the neighboring salt plain, she said.

The new findings were published on Oct. 28 in the journal Nature Ecology & Evolution.