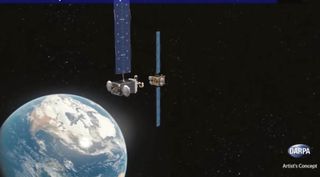 WASHINGTON — The Defense Advanced Research Projects Agency is considering proposals from potential new partners for its program to send a robot to space to repair satellites. DARPA suffered a major setback in January when Maxar withdrew from the project known as Robotic Servicing of Geosynchronous Satellites, or RSGS. Now the agency wants to give it one more try.

There are new players interested in partnering with DARPA, said Joe Parrish, the RSGS program manager. "It's fantastic that we have multiple entrants into the game," he told SpaceNews.

In the wake of Maxar's exit from the program, DARPA began a new search. RSGS started in 2016 as a public-private teaming arrangement where DARPA provided the satellite-servicing robot and a commercial partner paid to build the satellite and create an on-orbit servicing vehicle. Maxar was selected in 2017 but withdrew citing financial reasons.

DARPA invited interested contractors to a briefing in May and solicited new proposals, which were due July 23. The agency might select a new partner by the end of the year, Parrish said. But to avoid a repeat of what happened with Maxar, DARPA wants to make sure the bids are solid, he said. "DARPA is not obligated to make a selection," he said. "If we find one or more viable contenders, we will select one and initiate contract negotiations. We want to have a partner on contract, we hope, before the end of the year."

The overall program structure is still the same but some changes were made to the evaluation criteria, said Parrish, to "better address the business side of things. Some of that is lessons learned from the first substantiation."

"We are optimistic about our ability to find a new partner," said Parrish. The arrangement would be very similar to the one DARPA signed with Maxar, albeit with one major change: the commercial partner will be responsible to launch the RSGS vehicle into space. Under the previous effort, DARPA had agreed to arrange the launch through the Air Force in 2021. If a new partner is selected this year, a projected launch date would be late 2022 or early 2023.

If the project is successful, the commercial partner will be able to offer RSGS services for profit after DARPA completes the initial checkout phase. "All that is consistent with the way we always imagined the program," said Parrish.

The RSGS payload is a robotic arm along with the tools and electronics necessary to drive the arms. It is the same package the Naval Research Laboratory developed for the first RSGS.

"The payload is now more mature," said Parrish. The satellite provider now "knows what the payload is going to look like and understands the capabilities to interface with," he said. "That is a great benefit that we didn't have more than two years ago when we first solicited for a partner."

Two robotic arms equipped with cameras are being built. "They are all in-flight hardware production," said Parrish. "That is a major accomplishment of the program." The NRL will be responsible for the integration of the payload with the satellite. "Eventually the system is owned completely by the commercial partner," said Parrish. "We transfer ownership of the payload at some point when they satisfy requirements. The long term plan is that it will be 100% owned and operated by the commercial partner."

The calculus of what the robotic arm is worth to a contractor and what the government gets for its investment will be part of the negotiations before a deal is signed.

Parrish did not provide a cost estimate for the development of the payload. DARPA has invested not only in the robotic arm but also in software and lasers that the RSGS vehicle would need to measure the distance to the satellite it needs to service. An industry analyst estimated that over the past three years the agency has invested more than $200 million in the program.

"There are a number of things of value the company can provide to offset the cost of the payload," said Parrish, such as discounted pricing for future servicing of government satellites, and operational data on servicing operations that the government may take into account in future programs.

One big unknown is whether the satellite-servicing market will take off in the foreseeable future, a consideration that weighs heavily as companies consider either investing their own resources or seeking venture capital.

Parrish said satellite servicing in geosynchronous Earth orbit is emerging as a viable business. In GEO today there are about 400 operational satellites. "We think about 250 are candidate clients for RSGS," he said. Of the 250, 80 are owned by the U.S. government. That is a large number of satellites that could benefit from RSGS services, said Parrish. Services would include on-orbit inspection, relocation and maneuvering within the GEO belt or to the GEO graveyard. Other missions would be to fix specific problems like when a solar array fails to deploy. "That is one that is particularly attractive. Those issues pop up with new spacecraft, and we might be able to come along and help," he said. RSGS also could be used to attach new sensors to older satellites. "We have the ability to install these packages with our manipulators."

Former DARPA director Tony Tether said initial plans to develop a robotic satellite servicing vehicle were conceived shortly after he arrived in 2001. Then-defense secretary Donald Rumsfeld was a space advocate who worried that the Pentagon was not developing next-generation technologies and urged Tether to focus on space projects.

The predecessor program to RSGS started in 2002 under the name Orbital Express. "The problem then is still a problem today," Tether told SpaceNews in a recent interview. "When satellites go into space, they go with everything they're going to have. It's impossible to go update them."

"We started Orbital Express to show this could be done," Tether said.

Tether left DARPA in 2009. A decade later, there is still a need for a satellite-servicing capability, he said. "It comes down to economics." Satellites in GEO orbit are typically designed to last 15 years. Their operational life can be extended with additional fuel and electronics upgrades, said Tether. "You can avoid the launch cost and production cost of a new satellite."

While DARPA consistently championed the technology, neither DoD nor the Air Force has explicitly shown interest in a satellite-servicing vehicle. That led DARPA to recast the program in 2013 as a commercial venture and rename it RSGS.

Already companies like Northrop Grumman are moving to develop and build on-orbit servicing vehicles like the Mission Extension Vehicle. Analysts estimate a market worth $3 billion for orbital services that satellite operators and government agencies will acquire over the coming decade. A Northrop Grumman spokesperson said the company would not discuss its participation, if any, in the RSGS program. Orbital ATK, which has since been acquired by Northrop Grumman, sued DARPA in February 2017 over the agency's partnership with Maxar on grounds that DARPA's effort was in direct competition with the private sector.  A judge dismissed the suit in July 2017.

RSGS program advocates now worry that private investors will remain skittish until DoD and the Air Force explain how they might take advantage of these services. They believe that a commitment by DoD to use satellite-repair services would go a long way to bolster the RSGS business case.

Parrish remains optimistic. Whether it's DARPA or a private company, "somebody for the first time will fix a broken satellite in space using robots," he said. "There's going to be so many people popping Champagne corks. I can't wait for that day."