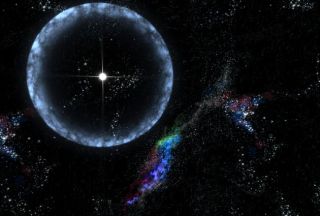 Artist impression of the eruption streaming out in all directions through the galaxy.
(Image: © NASA)

A huge explosion halfway across the galaxy packed so much power it briefly altered Earth's upper atmosphere in December, astronomers said Friday.

No known eruption beyond our solar system has ever appeared as bright upon arrival.

But you could not have seen it, unless you can top the X-ray vision of Superman: In gamma rays, the event equaled the brightness of the full Moon's reflected visible light.

The blast originated about 50,000 light-years away and was detected Dec. 27. A light-year is the distance light travels in a year, about 6 trillion miles (10 trillion kilometers).

The commotion was caused by a special variety of neutron star known as a magnetar. These fast-spinning, compact stellar corpses -- no larger than a big city -- create intense magnetic fields that trigger explosions. The blast was 100 times more powerful than any other similar eruption witnessed, said David Palmer of Los Alamos National Laboratory, one of several researchers around the world who monitored the event with various telescopes.

"Had this happened within 10 light-years of us, it would have severely damaged our atmosphere and possibly have triggered a mass extinction," said Bryan Gaensler of the Harvard-Smithsonian Center for Astrophysics (CfA).

There are no magnetars close enough to worry about, however, Gaensler and two other astronomers told SPACE.com. But the strength of the tempest has them marveling over the dying star's capabilities while also wondering if major species die-offs in the past might have been triggered by stellar explosions.

The Sun is a middle-aged star about 8 light-minutes from us. Its tantrums, though cosmically pitiful compared to the magnetar explosion, routinely squish Earth's protective magnetic field and alter our atmosphere, lighting up the night sky with colorful lights called aurora.

Solar storms also alter the shape of Earth's ionosphere, a region of the atmosphere 50 miles (80 kilometers) up where gas is so thin that electrons can be stripped from atoms and molecules -- they are ionized -- and roam free for short periods. Fluctuations in solar radiation cause the ionosphere to expand and contract.

Still, scientists were surprised that a magnetar so far away could alter the ionosphere.

"That it can reach out and tap us on the shoulder like this, reminds us that we really are linked to the cosmos," said Phil Wilkinson of IPS Australia, that country's space weather service.

"This is a once-in-a-lifetime event," said Rob Fender of Southampton University in the UK. "We have observed an object only 20 kilometers across [12 miles], on the other side of our galaxy, releasing more energy in a tenth of a second than the Sun emits in 100,000 years."

Some researchers have speculated that one or more known mass extinctions hundreds of millions of years ago might have been the result of a similar blast altering Earth's atmosphere. There is no firm data to support the idea, however. But astronomers say the Sun might have been closer to other stars in the past.

A similar blast within 10 light-years of Earth "would destroy the ozone layer," according to a CfA statement, "causing abrupt climate change and mass extinctions due to increased radiation."

The all-clear has been sounded, however.

Researchers don't know exactly why the burst was so incredible. The star, named SGR 1806-20, spins once on its axis every 7.5 seconds, and it is surrounded by a magnetic field more powerful than any other object in the universe.

"We may be seeing a massive release of magnetic energy during a 'starquake' on the surface of the object," said Maura McLaughlin of the University of Manchester in the UK.

Another possibility is that the magnetic field more or less snapped in a process scientists call magnetic reconnection.

Gamma rays are the highest form of radiation on the electromagnetic spectrum, which includes X-rays, visible light and radio waves too.

The eruption was also recorded by the National Science Foundation's Very Large Array of radio telescopes, along with other European satellites and telescopes in Australia.

Millions of neutron stars fill the Milky Way galaxy. A dozen or so are ultra-magnetic neutron stars -- magnetars. The magnetic field around one is about 1,000 trillion gauss, strong enough to strip information from a credit card at a distance halfway to the Moon, scientists say.

Of the known magnetars, four are called soft gamma repeaters, or SGRs, because they flare up randomly and release gamma rays. The flare on SGR 1806-20 unleashed about 10,000 trillion trillion trillion watts of power.

"The next biggest flare ever seen from any soft gamma repeater was peanuts compared to this incredible Dec. 27 event," said Gaensler of the CfA.