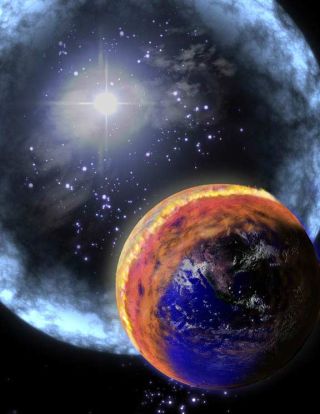 Artist's conception of gamma rays from a massive star explosion hitting the Earth's atmosphere. (The expanding shell is pictured as blue, but gamma rays are actually invisible.) The gamma rays initiate changes in the atmosphere that deplete ozone and create a brown smog of NO2. Scientists say that a gamma-ray burst might have caused the Ordovician extinction 450 million years ago. Image
(Image: © NASA)

When stars go pop, a murderous torrent of energy is released. Life on Earth may have been partly extinguished by just such a violent outburst, but there's little hard evidence yet to justify such a claim. A new study plans to fill in the forensic details.

"We are trying to get a better estimate of how dangerous a particular event will be," says Brian Thomas of Washburn University in Topeka, Kansas.

Thomas and his colleagues will be studying the wide-range of astrophysical phenomena that could fling high energy radiation across interstellar space to Earth's doorstep [as occured in a colossal blast detected in 2004]. The team also will radiate different types of phytoplankton to understand how life would be affected by a stellar blast, since life around the globe is highly dependent on these microscopic plants.

The danger from stellar explosions has been considered before, but this will be the first comprehensive study. "We are building on previous work by broadening it to a wide range of astrophysical events and by making the biological modeling more precise," Thomas says. The project is part of NASA's Exobiology and Evolutionary Biology Program.

Stars are generally too far away to be a concern for life on our planet. But certain stellar eruptions have the potential to reach across tens or even thousands of light-years.

The most familiar of these is a supernova, which is the curtain call of a massive star with eight or more times the mass of our sun. When the nuclear fuel runs out for such a behemoth, the collapsing core generates an explosion that outshines an entire galaxy-worth of stars while it lasts.

A couple supernovae go off in our galaxy every century. But for one of these to have serious consequences for Earth, we would need to be roughly within a 10 light-year radius of the blast.

The number of GRBs is much less than the number of supernovae, but the exact rate in our galaxy is still a matter of debate. A few years ago, a group of astronomers calculated that the likelihood of a GRB going off near us was very low, due to the fact that GRBs tend to arise in young galaxies with less heavy elements than the Milky Way.

But Thomas says that subsequent analyses have called this calculation into question, partly because our galaxy has merged in the past with smaller, younger galaxies that could have brought GRB-ticking-time-bombs in with them. "Our likelihood for hosting a GRB could vary with time," Thomas says.

He speculates that on average a GRB lights up our galaxy about once every 10 million years.

Long-duration GRBs and supernovae may be the best-understood, but they are not the only super-stellar calamities.

Soft gamma-ray repeaters also originate from neutron stars – supposedly when the super-dense surface cracks.  If one of these happened 10 light-years away, the effects could be dramatic. Indeed, on Dec. 27, 2004, the radiation from a soft gamma-ray repeater disrupted radio wave transmissions on Earth. Nothing was damaged, but the source object was an amazing 50,000 light-years away.

Thomas and his colleagues will be pulling together recent data from the Swift satellite and the Fermi Gamma-Ray Space Telescope to better estimate the rates and radiation output of soft gamma-ray repeaters, GRBs and supernovae.

Although there's no evidence that one of these went off recently in our neighborhood, it's important to note that our sun migrates around the galaxy and therefore could have brushed next to a star having a high-energy fit.

The other half of the study will look at the possible biological aftermath of an astrophysical firework going off nearby.

Gamma rays and X-rays cannot penetrate very far into the Earth's atmosphere, but they still can have a long-lasting impact. The high-energy radiation breaks apart nitrogen and oxygen molecules in the Earth's stratosphere, allowing them to reform as nitric oxide (NO). This molecule destroys ozone in the same way that chlorofluorocarbons (CFCs) do.

"The effect is like the current ozone hole, but spread over the globe," Thomas says.

Ozone protects life on Earth from the sun's ultraviolet rays. By shattering this atmospheric shield, an astrophysical blast could lead to higher rates of DNA and protein damage in organisms from greater sunlight exposure.

Thomas' group has previously determined that a relatively close GRB could destroy 75 percent of the ozone in certain regions, with a globally averaged depletion of around 35 to 40 percent. In contrast, the ozone hole that currently hovers over Antarctica is at most 60 percent depleted but only accounts for a globally-averaged depletion of 3 to 5 percent.

Thomas says that the ozone destruction would begin as soon as the radiation hits, and would continue for several years. It may take more than a decade for the Earth's ozone shield to return to full strength.

The loss of ozone would have serious effects on life across the planet. One of the most susceptible organisms would be phytoplankton. These single-celled organisms live at the top of the water column, where UV light is able to reach. They also reproduce quickly, so DNA damage would accumulate over several generations.

If phytoplankton began dying off, the effects would ripple throughout the ocean, since these photosynthetic microbes are the base of the marine food chain. They also produce at least half of the world's oxygen.

The team has selected a couple representative species of phytoplankton to irradiate at different levels, and see how their productivity levels change. The results of the study should give astrobiologists a better sense of how likely it is that our planet or another planet in our galaxy was zapped by a stellar eruption.

Possible signs of such astrophysical foul play are seen in the Ordovician extinction, which occurred 450 million years ago and resulted in the loss of 60 percent of marine invertebrates. The fossil record shows that organisms near the top of the water column and at mid-latitudes were hardest hit, as one would expect from a sudden loss of ozone.