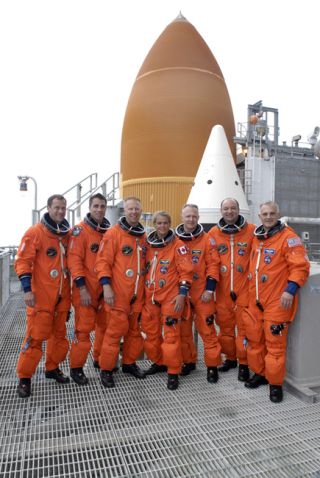 Sevenastronauts are gearing up for what they expect to be a grueling orbital construction mission to the International Space Station this week aboard the shuttleEndeavour.

As planned,the mission will tie the record for longest shuttle flight to the station. Itwill also mark the first time 13 people have lived aboard the outpost at thesame time since the station doubled its population to full six-personcrew earlier this month.

LeadingEndeavour?s crew is Polansky, 53, a two-time shuttle flyer making his thirdtrip to the space station. But the mission is Polansky?s first foray into theonline micro-blogging Web site Twitter, where he has been detailing the missionunder the handle @Astro_127.

?I reallywant people in every walk of life to understand that NASA exists,? saidPolansky, who has more than 17,800 followers and is the second NASA astronautto use the social networking tool on a mission.?

A veteranU.S. Air Force test pilot from Edison, N.J., Polansky joined NASA?s astronautcorps in 1996 and is making his second trip as commander. He is married to wifeLisa and has a 4-year-old daughter and a young son who will turn 2 years oldduring the upcoming spaceflight.

DuringEndeavour?s flight, Polansky will keep close tabs on his crew to make sureeveryone rests between spacewalks and challenging robotic operations.

?You alsoget a little chronic fatigue. It?s easy to go ahead and not realize how tiredyou are,? Polansky said. ?I?ll be the mother hen and watch over things likethat.?

Endeavour?spilot is U.S. Marine Corps Lt. Col. Doug Hurley, 42, who will begin the firstspaceflight of his astronaut career when the shuttleblasts off.

A testpilot from Apalachin, N.Y., Hurley joined NASA?s astronaut ranks in 2000 andhas a unique view on the risks of human spaceflight. He was the last person tosee the seven astronauts of the shuttle Columbia?s STS-107 mission before theylaunched into space on their ill-fated 2003 flight that ended tragedy duringre-entry.

?Being thelast person to see them in person, it took a while for me to work through thatand what I was doing? it?s a tough deal to lose seven friends in an instant,?Hurley told SPACE.com. ?Spaceflight?s not routine, there?s significantrisk. But there?s also significant reward and I?m comfortable with the risk.?

Hurley saidhe?s looking forward to looking out Endeavour?s windows at Earth and heapparently likes to go fast. His NASA biography lists watching ?as many NASCARraces as possible? as one of his chief interests

?I don?tknow what it was, if it was the cars or just the spectacle,? Hurley said of thefirst time he went to a race. ?But I was immediately hooked.?

Rookieastronaut Chris Cassidy, a veteran U.S. Navy SEAL, will be pulling double dutyduring Endeavour?s flight. Not only is the Navy commander part of the shuttle?sfour-man spacewalking team, he is also slated to become the 500th person inhistory to reach space once the shuttle launches.

?I?mhonored to have a position, whether it?s 499, 500 or 501,? Cassidy, 39, said inan interview. But he and his crew have been training so hard, they were unawareof the space history milestone, he added.

Cassidygrew up in York, Maine, and spent 10 years as a Navy SEAL. He joined NASA?sastronaut corps in 2004, on his second try, as part of the agency?s most recentclass. He will serve as Mission Specialist 1 and perform three spacewalksduring the upcoming mission.

?That wholefirst 8 1/2 minutes, I just can?t wait,? Cassidy said of the initial launchinto space. He and wife Julie have three children, two daughters - ages 14 and11 - and a 10-year-old son. His younger daughter will turn 12 the day beforelaunch, Cassidy said. ?

CanadianSpace Agency astronaut Julie Payette, 45, is the only non-American onEndeavour?s crew and the mission?s robotic arm expert, which is fitting sincethe main robotic arms on both the shuttle and the International Space Stationwere built by her home country. She first flew in space during a 1999 NASAshuttle mission and is eager to see how she?ll react in orbit again.

?It?s been10 years since I?ve been in space,? Payette said in a recent briefing. ?Ireally wonder if my brain will remember what it?s like to return toweightlessness.?

As MissionSpecialist 2, Payette will oversee some of the most challenging robotic armoperations, which include seven different handoffs of massive componentsbetween from one arm to another. She will also serve as the mission?s flightengineer to aid Endeavour?s commander and pilot during launch and landing.

A native ofMontreal, Quebec, Payette is married to husband Billie Flynn and has two sons,ages 15 and 4, though her youngest will turn 5 during the spaceflight.

She joined Canada?sastronaut corps in 1992 and will join another Canadian astronaut, RobertThirsk, in space after launching. Thirsk is part of the station?s six-man crew.It will be first time two Canadians have been in space at the same time, with athird Canadian citizen - space tourist Guy Laliberte - slated to launch laterthis year.

?It doestouch people and it is part of their lives,? Payette said of Canada?s spaceefforts. She plans to take some traditional cookies shaped like maple leafs andother national treats to mark the mission, she added.

After yearshelping others cope with the medicaleffects of spaceflight, Endeavour astronaut Tom Marshburn is eager toexperience them for himself.

?I?ve followedpeople flying in space for 15 years now, and to be able to experience some ofthose things ? I just can?t wait to try it out and see how it works,?Marshburn, 48, told SPACE.com.

A formeremergency room doctor and NASA flight surgeon, Marshburn is Endeavour?s MissionSpecialist 3 and will perform three spacewalks during the flight. In additionto his medical degree, Marshburn holds degrees in physics and engineering physicsand hoped from a young age to find a place at NASA.

Marshburngrew up in Statesville, N.C., and once backpacked from Canada to Mexico alongthe Pacific Crest Trail. He joined NASA as a flight surgeon in 1994 and wasselected to be an astronaut in 2004. Marshburn is married to wife Ann and has a6-year-daughter.

A veteranof four spacewalks, Wolf will serve as Mission Specialist 4 and the leadspacewalker during Endeavour?s trickyconstruction flight. He will perform three spacewalks himself andchoreograph the others after years of serving as chief of the spacewalkingbranch at NASA?s Astronaut Office.

Wolf isfrom Indianapolis, Ind., and joined NASA?s astronaut corps in 1990. He is a medicaldoctor and engineer, as well as a retired Air National Guardsman with a passionfor acrobatic flying (he rebuilt his own plane) and recently built a motorcyclefrom scratch.

A penchantfor tinkering is vital for astronauts tackling the ?wall of spacewalks,? morethan 120 so far, to build the space station over more than 10 years, Wolf said.

?The wallwas really hard, but in fact we made it?we got over it,? said Wolf. ?We have alot of [spacewalking work] yet to go, we just know how to deal with it better.?

Roundingout Endeavour?s crew is U.S. Army Col. Tim Kopra, a 45-year-old test pilotmaking his first trip into space. While Kopra will begin Endeavour?s MissionSpecialist 5, his true home is the station, where he plans to spend monthsliving and working in space.

?I?m justreally excited about it,? Kopra said in an interview, adding that being an astronautwas on his childhood short list of lifetime goals. ?I really couldn?t behappier.?

Kopra grewup in Austin, Texas, and has two children - a daughter, 13, and son, 12, - withhis wife Dawn. He joined NASA?s astronaut corps in 2000 and will perform onespacewalk while Endeavour is docked at the station.

As a NASAflight engineer, Kopra will replace Japanese astronaut Koichi Wakata as part ofthe station?s first full six-person crew. Wakata is Japan?s first long-termspace resident and has lived aboard the station since March. He will return toEarth aboard Endeavour while Kopra will ride another shuttle home in August.

?It?ll be alittle more of a personal place to work because there?s more interaction withpeople,? Kopra said of the larger staffed station. ?We have a lot of space, butit needs to be carefully choreographed so that it works out.?