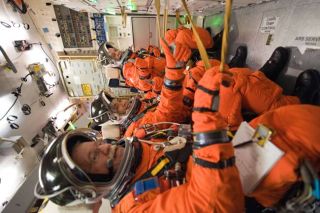 ?They?veall proven themselves to have been outstanding astronauts,? Archambault said ofhis crew in a recent interview. ?I?m anxious to see how they perform in orbit.?

Archambaultand his crew were slated to launch Feb. 12, but NASA delayed their spaceflightnearly a month due to fuel valve concerns with their shuttle. After weeks oftests and analysis, and a bit of extra training, Discovery and its crew areonce more poised for launch.

Archambault,48, is making his second spaceflight aboard Discovery, though the mission ishis first stint as commander. He served as pilot of the shuttle Atlantis duringits STS-117 flight in 2007, which also delivered a pair of U.S. solar arrays,and now sees himself as a conductor of sorts to orchestrate his Discoverycrewmates into awell-oiled spaceflying machine.

?As far asmy responsibility goes, my first responsibility is overall safety for the crewand two, mission success,? Archambault has said. A colonel in the U.S. AirForce, Archambault flew combat missions in the Gulf War and served as a testpilot before being selected to join NASA?s astronaut corps in 1998.

He grew upin Bellwood, Ill., near Chicago, which also happened to be the hometown ofGemini and Apollo astronaut Eugene Cernan - the last man to walk on the moon.Archambault fondly remembers attending a parade in Cernan?s honor as a6-year-old, but his goal to become an astronaut crystallized later in lifewhile in the military.

Archambaulthas a master?s degree in aeronautical engineering. He and wife Kelly have twodaughters, ages 11 and 17, and a 15-year-old son.

?I?ve wantedto do this for as long as I can remember wanting to do anything,? saidAntonelli, 41.

Antonelliis a commander in the U.S. Navy and test pilot with some 273 aircraft carrierlandings under his belt. He joined NASA?s spaceflying ranks in 2000 and holds amaster?s degree in aeronautics and astronautics.

DuringDiscovery?s flight, Antonelli will double up as the lead shuttle robotic armoperator. An avid snowboarder and NASCAR fan, he?ll be toting a green flag forthe Andretti Green Racing IndyCar team in his space luggage and hopes to serveas an official starter in an IndyCar race after his flight.

Antonelligrew up in Fayetteville, N.C., and is married to wife Janeen with two sons,ages 4 and 7.

Joseph Acaba,a geologist and math teacher, is making his flight spaceflight as one of the twoeducator astronauts to launch spaceward aboard Discovery. He?ll serve asMission Specialist 1 during Discovery?s flight and perform two of the fourplanned spacewalks.

?I?mlooking forward to the whole experience,? Acaba, 41, said in a recentinterview. ?To be put on top of a rocket ship and blast off, I don?t know ifanyone at this point can tell you what they think it will be like.?

Acaba grewup in Anaheim, Calif., and served as a hydrogeologist in Los Angeles beforejoining the Peace Corps to spend two years promoting environmental education inthe Dominican Republic. He also coordinated a mangrove revegetation project inFlorida, has served as a reservist in the U.S. Marine Corps, and taught mathand science to middle and high school students in Florida before joining NASAin 2004.

An avidscience fiction fan, Acaba confesses that his childhood reading passion had abig impact on shaping his path toward space.

?Itimpacted me a lot, and it really opened my imagination to all those things thatwere possible,? Acaba said. ?I think we?re living in what was science fictionnot too long ago.?

?I don?tthink it?s ever going to be old hat,? Swanson said. ?Just because you?ve doneit once doesn?t mean you?re an expert at it.?

The48-year-old Swanson will perform three of the Discovery crew?s four plannedspacewalks and serve as the shuttle?s flight engineer and Mission Specialist 2.He?s hoping that despite the spaceflight?s busy schedule, he?ll get some timeto switch off Discovery?s cabin lights and gaze out at the Earth and deepspace.

Swanson hashad a lifelong penchant for exploration. He grew up in Steamboat Springs,Colo., and has a doctorate in computer science.

?Growingup, I loved to explore and go for hikes, not even follow a trail,? he said in aNASA interview. ?Just off and go, finally get to the top of a mountain somewhere.?

Swansonjoined NASA as a flight simulation engineer in 1987 and was selected to be anastronaut in 1998. He and wife Mary have two sons, ages 13 and 23, and a19-year-old daughter.

First-timespaceflyer Richard ?Ricky? Arnold II is the second teacher-turned-astronaut onDiscovery?s crew, though for him working in far-flung locales is nothing new.

The formermiddle and high school teacher has taught students in Morocco, Saudi Arabia,Indonesia and Romania, as well as served a stint aboard an oceanographic vesselas a marine biologist before joining NASA?s astronaut corps in 2004.

?There weretwo things I was really interested in when I was a kid,? Arnold, 45, said in aninterview. ?There were Apollo astronauts and then every Sunday evening therewas the undersea world of Jacque Cousteau.?

Arnold hasa master?s degree in marine, estuarine and environmental science. He joinedNASA?s spaceflying ranks after 15 years teaching math and science and willperform three of the four spacewalks ahead as Mission Specialist 3 aboardDiscovery.

Arnold grewup in Bowie, Md. He and wife Eloise have two daughters, ages 11 and 13.

AstronautJohn Phillips is by all accounts the grizzled veteran of Discovery?s crew, withmore time in space under his belt than all of his crewmates put together. Asthe shuttle?s Mission Specialist 4, Phillips will serve as the main spacestation robotic arm operator.

Phillips,57, lived aboard the International Space Station for six months in 2005 after ashort visit during a 2001 shuttle flight. He is returning to the orbitinglaboratory for the third time aboard Discovery and is eager to see how it lookswith new solar arrays and international laboratories from Europe and Japan.

?I have alittle nostalgia to see those places that were my home for six months,? hesaid. ?But I also think it?s going to be really cool to see the nice, new,bright shiny modules that I?ve never seen.?

Phillipssaid exploration has been in his veins since his youth and he vividly recallsthe launches of Sputnik and Explorer 1 that usheredin the Space Age. Later, the first human spaceflight by Russian cosmonautYuri Gagarin launched in 1961 just before Phillips?s 10th birthday, he added.

?Trying tobe an explorer is what I signed up to do and what I?ve wanted to do all mylife,? said Phillips, who is a former Navy aviator and joined NASA?s astronaut corpsin 1996. ?It?s the best job I?ve ever had and as long as they let me fly, I?mgoing to do it.?

Phillipshas a doctorate in geophysics and space physics and grew up in Scottsdale,Ariz. He and wife Laura have a daughter, 18, and son, 20.

Wakata, 45,is Japan?s first long-duration astronaut and will replace NASA astronaut SandraMagnus as a flight engineer for the station?s current three-person Expedition18 crew. He is making his third spaceflight and represents the Japan AerospaceExploration Agency as Discovery?s Mission Specialist 5.

?This isanother big leap year for Japan to start living on the space station for longtimes,? said Wakata, who will oversee Japan?s two-room Kibo laboratory andEurope?s Columbus module while aboard the space station.

An avidflyer, Wakata is a former Japan Airlines pilot from Saitama, Japan, and holds adoctorate in aerospace engineering. He joined Japan?s astronaut corps in 1992and later trained at NASA?s Johnson Space Center in Houston. He and wifeStefanie have one son, age 10.

Discovery?smission adds some symmetry to Wakata?s spaceflight career. He first flew aboarda NASA shuttle in 1996 and on his last shuttle flight in 2000 he helped deliverthe very first piece of the space station?s backbone-like main truss. Now,he?ll help install the final piece of that truss to complete a girder structurethat will stretch the length of an American football field.

?This isamazing what we have done so far,? Wakata said. ?It?s amazing to see the growthof the space station.?