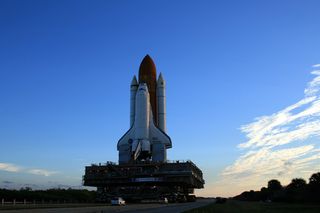 NASA's space shuttle Discovery rolls out to Pad 39A at the Kennedy Space Center for a planned Feb. 12, 2008 launch from Cape Canaveral, Fla.
(Image: © Roger Guillemette/SPACE.com)

The spaceshuttle Discovery rolled out to its Florida launch pad Wednesday, whereengineers will prime the spacecraft for NASA?s first manned spaceflight of theyear.

?We had noissues once we started rolling,? NASA spokesperson Allard Beutel told SPACE.comfrom the spaceport. ?It was a beautiful rollout.?

Discoverywill carry a crew of seven astronauts and the last pair of U.S. solar arrays forthe International Space Station when it launches next month. The two expansivesolar wings are the fourth and final set to support the space station?s powergrid. They are attached to a girder-like Starboard 6 (S6) segment, the lastpiece of the 356-foot (109-meter) main truss that serves as the orbitinglaboratory?s backbone.

?The S6truss is the last major piece of U.S.-built hardware to go to the spacestation,? Beutel said.

Wakata isthe first long-duration spaceflyer for the Japan Aerospace Exploration Agencyand will oversee the station?s Japanese Kibo laboratory among his other flightengineer duties. Magnus will return to Earth aboard Discovery after spendingmore than three months aboard the space station.

Spaceshuttle engineers will install Discovery?s 32,000-pound (14,514-kg) solar arraytruss segment inside the orbiter?s payload bay on Saturday. Archambault and hiscrew, meanwhile, are due to arrive at the Kennedy Space Center next week for alaunch dress rehearsal, Beutel said.

Discovery?sFebruary launch is the first of five NASA shuttle missions planned for 2009. Oneflight will carry astronauts to pay a final service call on the Hubble SpaceTelescope, with the other four to bring the decade-oldInternational Space Station closer to completion.

?Every timewe get to the launch pad, it gets us one step closer to flying the shuttle,?Beutel said. ?This is the beginning of our final push to complete theInternational Space Station.?