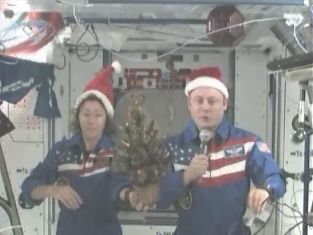 Astronautsaboard the International Space Station have sent holiday wishes to the peopleof Earth and may celebrate with some festive Christmas cookies today as theyfly high above their home planet.

Spacestation commander Michael Fincke and flight engineers Sandra Magnus and YuryLonchakov have the ingredients for the cookies at their disposal thanks to arecent cargo ship that arrived at the orbiting laboratory last month. Theastronauts have a lightday planned for the holiday, NASA officials said.

?Magnusmade it a point to request that red, green, yellow, blue and white icing beamong her foods to be used to decorate an assortment of cinnamon, shortbread andbutter cookies also carried aloft,? NASA officials said in an update. ?The crewalso has a variety of candies to continue the high-calorie traditions so commonon Earth this time of year.?

?It is thistime of year when we can reflect on our blessings and the opportunity toadvance the cause of exploration through this great global project involvingnations,? Magnus said in the video message.

?We hopethat Santa?s good to you,? Fincke told flight controllers on Wednesday.

Astronautshave celebrated Christmas and other holidays aboard the International SpaceStation continuously since 2000, when the outpost?s first crew arrived. Thisyear also marksthe 40th anniversary of another notable space Christmas: the historic 1968flight of Apollo 8 around the moon, when astronauts Frank Borman, Jim Lovelland Bill Anders sent a Christmas Eve broadcast to Earth.

The Skylab4 crew built a homemadeChristmas tree out of empty food cans during their orbital holiday in 1973aboard the U.S. space station. NASA astronauts John Blaha and David Wolfcelebrated the holidays in space aboard Russia?s Space Station Mir in 1996 and1997, respectively. The STS-103 crew of NASA?s space shuttle celebratedChristmas in space by releasing the Hubble Space Telescope back into orbitafter a 1999 service call.

For Finckeand his Expedition 18 crew aboard the space station, this year?s holiday isespecially sweet. The Russian-builtProgress 31 spacecraft that delivered the holiday treats to the spacestation on Nov. 30 also included Christmas gifts for the crew from theirfamilies and friends on Earth.

?So happyholidays from the International Space Station and best wishes for a happy andhealthy year ahead,? Fincke said.