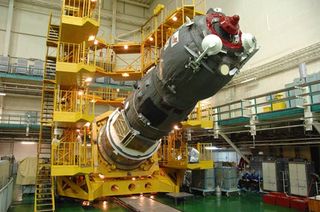 An upgraded Russian cargo ship launched toward the International Space Station early Wednesday, hauling fresh supplies for astronauts aboard the orbiting lab, though an antenna failed to deploy shortly after reaching orbit making it possible the spacecraft will have to be guided in manually by the orbiting lab's crew, NASA officials said.

The unmanned space freighter Progress 31 lifted off atop a Russian-built Soyuz rocket at about 7:38 a.m. EST (1238 GMT) from the Central Asian spaceport of Baikonur Cosmodrome in Kazakhstan. The spacecraft will dock at the space station on Sunday a few hours before the planned landing of NASA's space shuttle Endeavour, which is currently docked at the station and due to depart Friday.

Shortly after reaching space, one of several vital antennas for the spacecraft's automatic docking systems failed to deploy.

"Everything is working except for one thing," Russian Mission Control radioed up to the station crew. "One of the antennas did not deploy, it is still folded."

After the spacecraft was in flight, Russian mission controllers signaled the antenna to attempt to deploy again and it appears the attempt was successful, NASA officials said. Russian officials are still determining whether or not the cargo ship will need to be guided in manually to dock with the space station.

The antenna is one of two to be used during the spacecraft's final approach and berthing at the station's Russian-built Pirs docking compartment on Sunday at 7:23 a.m. EST (1232 GMT).

Without the antenna, it is more likely space station commander Michael Fincke, of NASA, and Russian flight engineer Yury Lonchakov will have to dock the Progress 31 spacecraft from inside the station using a remote control system called TORU.

"Make sure you refresh on everything so that everything is clear because the probability of using this mode is very high," Russian Mission Control called up.

Also known as Progress M-01M, the Progress 31 cargo ship is the latest in a series of Russian space freighters to launch toward the space station. But unlike its predecessors, the spacecraft is flying with new computer enhancements to be tested for Russia's future manned Soyuz vehicles.

Meanwhile, astronauts aboard the shuttle Endeavour will pack up their own cargo module, which delivered 14,400 pounds (6,531 kg) of cargo, including a new recycling system that converts astronaut urine and sweat back into potable water for drinking, food preparation, bathing and oxygen generation. They also tuned up the space station's balky starboard solar array-turning gear and installed two spare bathrooms, a second kitchen and bathroom, new gym equipment and space food refrigerator to the space station.