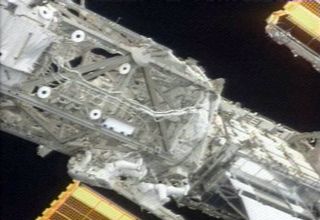 Spacewalkers Heide Stefanyshyn-Piper and Shane Kimbrough clean and grease a balky space station gear during a Nov. 20, 2008 spacewalk on the 10th anniversary of the ISS.
(Image: © NASA TV.)

Two NASAastronauts ventured outside the International Space Station on the orbitinglab?s 10th birthday Thursday in a spacewalk to continue tune-up work on theoutpost?s massive starboard side gear.

AstronautsHeide Stefanyshyn-Piper and Shane Kimbrough floated outside the station on thetenth anniversary of the launch of its first module and were determined notto let any tools escape while they cleaned metal grit out of the solararray-turning gear.

?HopefullyI won?t lose anything on the way,? Stefanyshyn-Piper said as she moved toolsaround near the spacewalk?s end. ?Everything?s tethered, so it?s just a matterof what?s going to stay in the bag.?

A $100,000bag of tools escapedfrom Stefanyshyn-Piper during a spacewalk two days ago when she and acrewmate began the complicated clean-and-grease job on the 10-foot (3-meter)wide gear. The lost bag carried some of the grease guns and other tools thatwere to be used during today?s spacewalk.

To make upfor the lost equipment, Stefanyshyn-Piper used terry cloth-like wipes loadedwith the special space lubricant as a makeshift grease mitt to limit the amountof time lost by having to share tools with Kimbrough. Theystarted their work at 12:58 p.m. EST (1758 GMT), more than 40 minutesearly.

Thespacewalk was the fourth for veteran spaceflyer Stefanyshyn-Piper and the firstfor Kimbrough, who was ordered back to the airlock near the end by MissionControl due to increased levels of carbon dioxide in his spacesuit. He also hadproblems hearing Mission Control, neither issue was a major concern, missionmanagers said. The mission?s next spacewalk is set for Saturday.

Thursday?ssix-hour and 52-minute spacewalk was the second of four excursions by thedocked shuttle Endeavour?s crew to tune up the space station?s starboard sidegear. The mechanism is designed to rotate the station?s starboard solar wingslike a paddlewheel so they always face the sun and maximize power production.

But unlikea similar gear on the station?s port side, which is working fine, the starboardgear has been grinding on itself, littering its delicate turning surface withmetal shavings that have eaten away at its bearings.

Endeavourspacewalkers have been steadily removing the damaged bearings, cleaning out themetal grit, applying a new layer of lubricant and installing brand newbearings. The work will take all four spacewalks, with the preventativelubrication of the port gear thrown in for good measure.

Thecomplicated spacewalk is part of Endeavour?s planned15-day mission to outfit the $100 billion International Space Station toaccommodate larger, six-person crews sometime next year. Inside the station,astronauts have been installing new gear to expand it from a three-bedroom,one-bath outpost into a five-bedroom facility with two bathrooms, two kitchens,a gym and a recycling system that turns sweat and urineinto drinking water.

In additionto the gear tune-up, Stefanyshyn-Piper moved a pair of equipment carts outsidethe station and added a touch of grease to the end of the outpost?sCanadian-built robotic arm.

Thursday?sexcursion marked the 116th spacewalk dedicated to space station constructionand maintenance. By sheer coincidence, it took place on the 10th anniversary ofthe launch of Zarya, a Russian-built module that was the first piece of thestation ever launched into space.

Zarya,whose name translates to ?Sunrise? in Russian, rocketed into orbit on Nov. 20,1998 at 1:40 a.m. EST (0640 GMT) atop a Proton booster launching from theCentral Asian spaceport of Baikonur Cosmodrome in Kazakhstan.

"Todayis a special day aboard the International Space Station," said thestation's current commander Michael Fincke in a recorded video commemoratingits 1998 birth. "And since then, the space station has gotten larger andlarger."

Since then,eight more pressurized modules have been added to give the now 313-ton spacestation the internal living space comparable to the cabin of a jumbo jet. NASAand 15 different partner nations have been working to assemble the station,which includes Russian and U.S. core modules accentuated by American, Japaneseand European space laboratories.

NASA spaceshuttles, Russian Soyuz and Progress vehicles and a European freighter have allvisited the outpost, with Japan set to launch its own cargo ship to the stationnext fall.

Since Zarya?s launch, thespace station has orbited the Earth more than 57,309 times, traveling some 1.3billion miles (2 billion km) - or almost enough to reach out beyond the orbitof the planet Pluto, NASA has said. Some 167 different people from 15 countrieshave visited the outpost. Astronauts have spent 732 hours and 25 minutesworking outside the space station to put it together.

It?sfitting that the shuttle Endeavour is currently docked at the space station, asit was the very same spacecraft that launched NASA?s Unity connection module tothe outpost in its early days of construction.

Under thecommand of veteran spaceflyer Chris Ferguson, Endeavour?s crew is now layingthe foundation for the space station to double its population in May 2009.

?This finecrew and its cargo will enable the space station to plus up to a crew of sixpeople living full-time,? Ferguson said in the video. ?After 10 years, we wishthe International Space Station a happy birthday and we hope to see many, manymore."