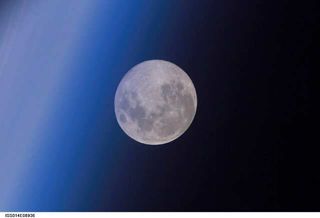 This view of a full moon was photographed by an Expedition 14 crewmember onboard the International Space Station. Earth's horizon and airglow is visible at left.
(Image: © NASA)

The full moon Friday night will be the biggest one of the year as Earth's natural satellite reaches its closest point to our planet.

Earth, the moon and the sun are all bound together by gravity, which keeps us going around the sun and keeps the moon going around us as it goes through phases. The moon makes a trip around Earth every 29.5 days. But the orbit is not a perfect circle.

Tides will be higher Friday night, too. Earth's oceans are pulled by the gravity of the moon and the sun. So when the moon is closer, tides are pulled higher. Scientists call these perigean tides, because the moon's closest point to Earth is called perigee. The farthest point on the lunar orbit is called apogee.

Some other strange lunar facts:

The moon will rise Friday evening right around sunset, no matter where you are. That's because of the celestial mechanics that produce a full moon: The moon and the sun are on opposite sides of the Earth, so that sunlight hits the full face of the moon and bounces back to our eyes.

At moonrise, the moon will appear even larger than it will later in the night when it's higher in the sky. This is an illusion that scientists can't fully explain. Some think it has to do with our perception of things on the horizon vs. stuff overhead.

Try this trick, though: Using a pencil eraser or similar object held at arm's length, gauge the size of the moon when it's near the horizon and again later when it's higher up and seems smaller. You'll see that when compared to a fixed object, the moon will be the same size in both cases.

You can see all this on each night surrounding the full moon, too, because the moon will be nearly full, rising earlier Thursday night and later Saturday night.

Interestingly, because of the mechanics of all this, the moon is never truly 100 percent full. For that to happen, all three objects have to be in a perfect line, and when that rare circumstance occurs, there is a total eclipse of the moon.