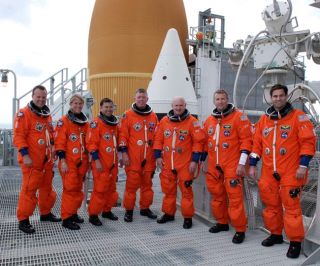 They may belight on space experience, but the seven astronauts set to launch aboard NASA?sshuttle Discovery on Saturday are raring to rocket into orbit.

?My crew?sready,? Kelly said this week after arriving at the Florida spaceport with hiscrewmates. ?We?ve been training for a year and we?re really looking forward tolaunch on Saturday.?

Discovery?ssix-man, one-woman crew is slated to spend two weeks in space delivering thetour bus-sized Kibo laboratory, performing maintenance and swapping out onemember of the station?s three-man crew. The astronauts are even packing somespare parts for the space station?s balkyspace toilet, with liftoff set for 5:02 p.m. EDT (2102 GMT) on Saturday.

Hailing from WestOrange, N.J, Kelly is a commander in the U.S. Navy and veteran of two shuttle flights,though Discovery?sSTS-124 mission will mark his first as commander. He flew combat missionsin Operation Desert Storm and served as a test pilot before joining NASA?sastronaut corps in 1996.

Kelly, 44,has over 375 carrier landings under his belt and spent 25 days in space duringhis two shuttle missions as pilot - the last of was NASA?s second return toflight test mission, STS-121, that followed the Columbia tragedy. As commander,he?s worked to ensure his crew is rested and ready for their challengingmission.

?There?s alot of other stuff that I have to pay attention to now that I didn?t when I wasthe pilot,? said Kelly, whose identical twin brother Scott Kelly is also a Navycommander and veteran astronaut. ?But it?s fun. I like it.?

Kelly hastwo daughters - ages 13 and 10 - and is married to Arizona congresswomanGabrielle Giffords. Saturday?s planned launch will be a particularly auspiciousday in his family, he added.

?It?s agood day to launch; it?s my dad?s birthday,? said Kelly, whose father Richardwill turn 68. ?So he?ll be happy about that.?

Kelly ishoping to finally snap a good photo of Mt. Everest from space during his freetime after being thwarted on previous flights.

?Maybethird time?s a charm on this one,? he said.

?It?s beena long time,? said Ham, whose call sign is ?Hock?, but added that the wait hasbeen worth it. ?Yes, without a doubt.?

With morethan 300 carrier landings under his belt, Ham flew combat missions over NorthIraq and Bosnia and served as a Navy test pilot to help develop the F/18 SuperHornet attack aircraft before joining NASA?s astronaut corps in 1998.

DuringDiscovery?s STS-124 mission, Ham will wield the shuttle?s robotic arm and serveas a choreographer for the mission?s three planned spacewalks to deliver Kibo. Hisjob is to make sure the spacewalkers are on track, and that they don?t gooutside and find themselves with the wrong tools for the job.

?I?m goingto try my best to not let that happen.? Ham said. Ham, a native of Plainfield,N.J., is married to wife Michelle and has two teenage sons.

Discovery?sMission Specialist 1 is Karen Nyberg, a first-time spaceflyer from Vining,Minn., who will become the 50th woman ever to reach space when the shuttlelaunches into orbit.

?What I?mreally looking forward to is the time when we?re not counting anymore,? saidNyberg, whose flight occurs near the 45th anniversary the launch of Russiancosmonaut ValentinaTereshkova, the first woman in space.

Amechanical engineer with a penchant for art and crafting, Nyberg joined NASA?sspaceflying ranks in 2000 and will be the first astronaut to wield threedifferent robotic arms - the shuttle?s, space station?s and Kibo?s new Japanesearm - in a single spaceflight. She will miss her two beloved dogs during theflight, but is looking forward to her first views from space.

?It?s hardfor me to imagine how just how beautiful it probably is,? said Nyberg, who haspursued an astronaut career since her childhood and was accepted on the veryfirst try.? ?I was very lucky.?

?I?m doingmy fantasy job right now, my dream job,? said Garan, 46, in a NASA interview. ?Thisis all I ever wanted to do and I?m really fortunate to do that.?

A native ofYonkers, N.Y., Garan will make his orbital debut as one of Discovery?s twoSTS-124 spacewalkers to help install the Kibo laboratory for Japan.

?We?relooking forward to going outside and hooking it up,? Garan said from Discovery?slaunch site this week, adding that the new orbital lab is the culmination ofmore than 20 years of work in Japan.

Garan ismarried to wife Carmel and has three sons; two twins, 17, and a 13-year-old.

Veteranspacewalker Mike Fossum, Discovery?s Mission Specialist 3, is the shuttle crew?sonly other member to fly in space before besides Kelly. He joined the astronautcorps in 1998 and last flew in 2006 during the STS-121 mission, with Kelly aspilot. He will lead the three planned STS-124 spacewalks.

A dedicatedBoy Scouts scout master and Eagle Scout, Fossum, 50, is married to wife Melaniewith a grown daughter, 23, and three sons, ages 21, 17 and 11. As one of thetwo senior astronauts, he?s been sharing some of the intricacies of spaceflightthat spaceflyers may not learn in regular training.

An example:choose your menu wisely. ?I, for instance, will never fly seafood gumbo again,?Fossum said, adding that it?s one of his favorite dishes on Earth. ?But upthere, it just didn?t seem right.?

Fossumhails from McAllen, Tex., and is looking forward to his role in adding a newroom to the space station.

?To havethe chance to be one of the guys to be bolting her together, that?s just a hugeprivilege for me,? said Fossum, a colonel in the U.S. Air Force reserve. ?If acar can be beautiful, the Kibo module can be beautiful.?

The hope of Japan

Japanese astronautAkihiko ?Aki? Hoshide of the Japan Aerospace Exploration Agency (JAXA) ismaking his first spaceflight as Mission Specialist 4 aboard Discovery. A stationrobotic arm operator, he will open JAXA?s Kibo laboratory for business afterattaching it to the space station.

?We?rehoping to accomplish a lot of scientific experiments on board,? said Hoshide,39, in a NASA interview. ?It?s a big milestone for Japan.?

[Clickhere for a full profile of Hoshide and JAXA's Kibo laboratory.]

Roundingout Discovery?s crew is Mission Specialist 5 Gregory Chamitoff, whose firstspaceflight will be much longer than the rest of his shuttle crewmate.

Chamitoff,a NASA astronaut born in Montreal, Canada, is set to begin a six-month mission tothe space station as a flight engineer with the outpost?s Expedition 17 crew.He will replace fellow NASA astronaut Garrett Reisman, who has lived aboard thestation since March.

?I feelvery lucky to be part of this crew and part of this mission,? said Chamitoff,45, a planetary geologist and engineer.

Reachingspace has been a lifelong goal for Chamitoff that began when his father tookhis family to see the launch of Apollo 11, NASA?s first mission to land on themoon, in July 1969.

?I told himthen that that?s what I want to do and kind of never gave up on that,?Chamitoff said in a NASA interview. ?I have to admit that I kind of grew up on ?StarTrek.??

Chamitoffand his wife Chantal have 3-year-old fraternal twins Natasha and Dmitri, thoughhis son seems to think he will launch into space with dad.

?They know there?sa space station and that I?m going to it, and it?s up in the sky,? saidChamitoff, adding that Dmitri has been running around the house wearing a miniaturespacesuit. ?He thinks he?s going?maybe next time or something.?