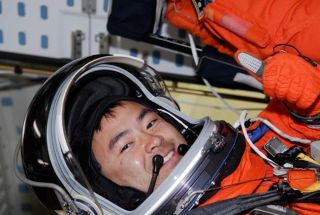 On Launch Pad 39A at NASA's Kennedy Space Center, STS-124 mission specialist Akihiko Hoshide sits in his seat aboard space shuttle Discovery following the simulated launch countdown for the May 31, 2008 launch of Japan's Kibo lab to the ISS.
(Image: © NASA/Kim Shiflett.)

Hoshide andsix crewmates are preparing to haul Japan?s$1 billion laboratory Kibo (which means ?Hope? in Japanese) to the InternationalSpace Station. The module, a massive orbital room the size of a large tour bus,will be the station?s largest laboratory once installed.

Commandedby veteran U.S. spaceflyer Mark Kelly, Discovery and its Kibo lab cargo are setto lift off Saturday at 5:02 p.m. EDT (2102 GMT) from their seaside launchpad at KSC. Hoshide, Kelly and their crewmates plan to deliver Kibo duringthree spacewalks, perform station maintenance and swap out a member of theoutpost?s three-man crew during their 14-day mission.

?I am veryexcited, and also very privileged, to be on this team,? said Hoshide, who ismaking his first spaceflight with Discovery?s STS-124 mission. ?I am veryconfident we?re going to get this mission done successfully.?

ForHoshide, the trip to space began while he was a child living in New Jersey in1968, when his father took him on a trip to NASA?s Florida spaceport, where hewas awed by the size of the agency?s Saturn V moon rockets and drawn to sciencefiction like ?Star Trek? and ?Star Wars.?

?That had ahuge impact,? he said in a NASA interview. ?All that influenced me and by thetime I was probably 10, you know, I was set for space.?

Born inTokyo, Hoshide is married and holds degrees in mechanical and aerospaceengineering. He joined what is now the Japan Aerospace Exploration Agency(JAXA) in 1992 and was selected to join the country?s astronaut corps in 1999.He is rated to serve as a flight engineer aboard Russian Soyuz spacecraft.

But first,Kibo must reach the space station.

Launchingaboard Discovery with Hoshide is Kibo?s robotic-arm equipped pressurized laboratory,a hollow cylinder nearly 37 feet (11 meters) long and about 14.4 feet (4.4meters) wide. Hoshide will use the space station?s robotic arm to attach theKibo lab to an open port-side berth near the front of the outpost.

It is thesecond of three segments that will make up the 15.9-ton Kibo facility andfollows an attic-likestorage room delivered by shuttle astronauts earlier this year. Astronautsplan to move the storage module from a temporary berth to its permanent homeatop the main Kibo module during Discovery?s STS-124 mission.

Anexternal, porch-likeplatform will complete the Kibo lab once it launches next year, with asmall airlock in the main module allowing astronauts to swap out experiments asneeded.

?I thinkthe Kibo module will have a uniqueness once we get the exposed platforminstalled,? Hoshide said.

Kibo isdesigned for a 10-year mission lifetime, though NASA and the U.S. have not yetdecided whether to extend their involvement in the space station project beyonda planned 2014 end date.

?We dostill need help from the U.S. side for the core portion of the space station,?Hoshide said. ?I?m hoping that it will be resolved in some way.?

Japaneseresearchers are planning a host of materials science and life scienceexperiments for Kibo, with JAXA officials developing a homegrown cargo ship -the H-2 Transfer Vehicle - to supply the laboratory and station as a whole.

?I hope theJapanese science community will further be engaged in space exploration and wecan accomplish a lot of scientific activities,? Hoshide said of Kibo?s impact.?But more than that, I think that it would expand the possibility on orbit,especially for the Japanese community. So that is my hope.?

Hoshide isexpected to open the Kibo lab in a ceremony, but how he will commemorate theevent is still a mystery.

?I guessI?ll probably have to make a speech,? Hoshide said with a smile. ?But I?m stillthinking about what to say.?