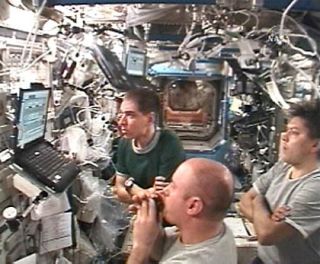 The Expedition 17 station crew reviews the STS-124 timeline during a conference with U.S. planners. Inside the Destiny laboratory are (from left), commander Sergei Volkov and flight engineers Garrett Reisman and Oleg Kononenko.
(Image: © NASA TV.)

Astronautsliving aboard the International Space Station (ISS) need help from an orbitalplumber to fix their troublesome space commode.

?We areworking with the Russians to see what spare parts they?d like us to launch,?space station flight director Annette Hasbrook told SPACE.com.

Hasbrooksaid the toilet is now working in a so-called ?manual mode,? which requires astronautsto use extra flush water instead of the air flow system as designed. The glitchonly afflicts the toilet?s liquid waste collection system, she added.

?It?s notstandard operating procedure, but they?re able to use it,? she added during aseries of televised interviews.

The sparepart is due to arrive around 10:00 p.m. EDT (0200 May 29 GMT) and be packedaway inside Discovery?s middeck early Thursday, Higginbotham said. Shuttleworkers will have to remove spare wrenches, air scrubber equipment and otheritems to make room for the last-minute item, he added.

?Clearly, havinga working toilet is a priority for us,? Higginbotham said in a morning statusbriefing.

NASA has agreed to pay Russia $19 million for asecond space toilet to be installed in the outpost?s U.S. segment laterthis year. The new toilet, along with extra living quarters and other lifesupport equipment, will prepare the station for larger, six-person crewsplanned for 2009.