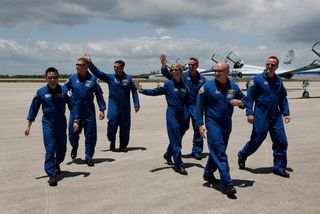 After greeting the media on their arrival on the Shuttle Landing Facility at NASA's Kennedy Space Center, the crew members of space shuttle Discovery's STS-124 mission wave and head for the van that will take them to crew quarters in the Operations and Checkout Building on May 28, 2008. They are set to launch to the ISS on May 31.
(Image: © NASA/Kim Shiflett.)

The weather forecast looks good for Discovery?s planned liftoff at 5:02p.m. EDT (2102 GMT) from a seaside pad here on Saturday, and mission managerssaid there are currently no issues that would prompt a delay for the spaceshuttle?s plannedweekend launch. Discovery?s seven-astronaut crew is set to deliver thespace station?s largest room, the Japanese Kibo pressurized module, during the14-day mission.

?We?re not carrying any constraints from here to launch on Saturday,?said LeRoy Cain, chair of the Mission Management Team, in a launch readinessbriefing here at NASA?s Kennedy Space Center in Cape Canaveral, Fla. ?Thevehicle and the crew and the weather and the team are all ready to go, and sowe?re really looking very good.?

In addition to Chamitoff, Discovery will drop off a few othernecessities for the space station, particularly for its orbital loo.

Last night a replacement pump arrived for amisbehaving toilet on the ISS?s service module. Ground crews loaded it into Discovery?s middeck this morning around 3:30 a.m. EDT (0730 GMT),removing less urgent items such as spare wrenches, which will be brought up ona later mission. The toilet has gone through three pumps already, with the lasttwo each working for only about a day.

?We?re hoping this new pump won?t have this issue,? said Kirk Shireman,NASA's deputy program manager for the space station. ?We?re told [the Russians]went through a testing program and they believe this pump is functioning? Theyknow it?s good to the best of their ability.?

The toilet pump isn?t the only addition to Discovery?s payload. NASAannounced today that a toy action figure of the Disney-Pixar character BuzzLightyear from the movie ?Toy Story? will fly to space with the crew.

Buzz?sjourney is part of a NASA educational partnership with Disney. While on thespace station, the doll will demonstrate laws of physics for kids, and onlinescience games featuring Buzz will be available on NASA?s website once Discoverylaunches.

Discovery?s seven crewmembers arrived at their launch site Wednesday andare spending today on final training routines and preparations for theirvoyage. They plan to fly T-38 jets for some last-minute flight practice andmeet with the president of the Japan Aerospace Exploration Agency (JAXA), whoseKibo lab will be the mainJapanese contribution to the space station.

?The module is already installed in the shuttle cargo bay and is waitingfor the launch,? said Yoshiyuki Hasegawa, Japanese Experiment Module programmanager. ?I?m looking forward to seeing the great exciting moment, and thegreat anticipation to the launch.?

There have been no changes to the weather forecast since yesterday, whenKathy Winters from the space shuttle weather office reported there was about an80 percent chance of weather permitting the launch on Saturday.

?We?re definitely going to have good weather, it looks like,? she saidthis morning. ?Overall, launch day one looks like the best day weather-wise forlaunch.?