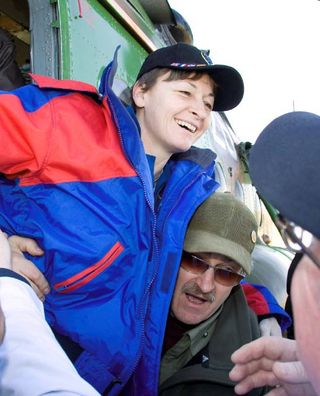 NASAastronaut Peggy Whitson said in an audio recording released Tuesdaythat her off-targetlanding aboard a Russian-built Soyuz spacecraft on Saturday was ?moredramatic than I was expecting,? but not as bad as she anticipated.

Whitsonreturned to Earth aboard a Soyuz TMA-11 spacecraft with Russian cosmonaut YuriMalenchenko and South Korean spaceflyer So-yeon Yi. They touched down about 260miles (420 km) short of their intendedlanding site and under a backup, ballistic mode. The landing subjected them to forces eight times that of Earth's gravity, while normal Soyuz descents reach about six times Earth's gravity.

?Shortlyafter [module separation] we switched automatically to the ballistic mode,which means we were going to be spinning up to 8 Gs and coming in on a steeperdescent,? said Whitson, who commanded the station?s six-month Expedition 16mission, in the post-landing recording. ?I saw 8.2 Gs on the meter; it waspretty, pretty dramatic. Gravity is not my friend right now, and 8 Gs wasespecially not my friend, but it didn?t last too long.?

Russianengineers are investigating what caused the steeper-than-normal descent - the secondin a row for a returning Soyuz. They are also looking into a potential issuewith the separation of the spacecraft?s propulsion and crew-carrying modules,NASA officials have said.

?You know [parachute]deploy was nominal and impact ? I guess maybe because I heard so many stories,wasn't quite as bad as I was expecting,? Whitson said.

Whitsonadded that Malenchenko, who commanded the Soyuz during launch and landing, kept his crew on task during the descent.

?Yuri is agreat Soyuz commander and he did a great job throughout the entire time makingsure we were on procedure and everything happened appropriately,? Whitson said.

Her first sensationsafter landing included a light breeze outside the Soyuz, the sound of birds andthe smell of burnt grass from brush fires, which NASA officials said were set by nearby farmers. Local Kazakhswere the first to welcome them back to Earth, the astronauts added.

?It wasjust some guys who had seen it,? Whitson said, adding that they arrived in timeto help her and Yi exit the spacecraft. ?It worked out really well and we justwaited until the search and rescue team arrived."

The landingmarked the end of an 11-day flight for Yi and marathon construction flightfor Whitson and Malenchenko during their Expedition 16 mission.

?Thisexpedition was probably one of the most amazing expeditions that has ever occurredon space station,? NASA space operations chief Bill Gerstenmaier said Tuesday.

Whitson and Malenchenko launched in October to host several NASA space shuttlecrews as they added new hardware to the space station. Together, they helpedfix damaged solar arrays and joints, and installed a connecting hub, European lab, Japanese storage room anda Canadian robot during their expedition.

?I think Iwas really lucky to be in a place and at a time when so many differentactivities were going on,? said Whitson, who set a new U.S. record for total timein space. The 192-day Expedition 16 flight pushed her to 377 total days inspace over two flights, the most of any NASA astronaut. ?When we separated, Iwas waving at the station.?

?Thrown inamong that were two Progress [cargo ships] and three shuttles,? she added.

Beforeleaving the space station, Whitson told SPACE.com that while there weremany high points during her mission, gazing down at Earth while workingoutside the space station in a spacesuit was near the top of her list.

The lowestpoint, she said in the recording, came in December, when the mother of her U.S.crewmate Dan Tani was killed in a car-train accident near Chicago.

?The lowpoints, it?s hard to have any, but Dan?s mom past away,? Whitson said, hervoice breaking at times.

During hersix months in space, Whitson gained a reputation for quick and efficient workthat constantly kept mission managers scrambling to come up with new tasks.Flight controllers dubbed it the ?Peggy Factor,? but Whitson said she onlywanted to do a good job.

?I?vealways said I?m not the sharpest tool in the shed, but I am able to work reallyhard,? she said. ?So I think that helped get me to where I was able to do thismission.?