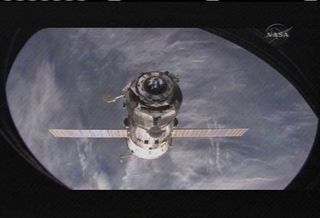 The unmanned Progress 28 spacecraft pulls away from the International Space Station in this still taken from a high-definition video recorded by an Expedition 16 astronaut on board.
(Image: © NASA TV.)

Astronauts aboard the International Space Station (ISS) jettisoned a Russian cargo ship packed with trash early Monday to clear a parking spot for an incoming crew.

Three hours later, the Progress 28 spacecraft fired its rocket engine to begin a fiery plunge through the Earth's atmosphere that ended with its intentional destruction over the Pacific Ocean. Russian space officials said some debris survived reentry, but splashed down well away from populated waters.

"The drop zone for spaceship fragments, which did not burn in dense layers of the atmosphere, was located away from navigation routes, about 3,000 kilometers east of the New Zealand capital city of Wellington," Russia's Federal Space Agency spokesperson Valery Lyndin told the Russian Interfax News Agency.

Yi and the Expedition 17 crew are poised to launch toward the station on Tuesday at 7:16 a.m. EDT (1116 GMT). They will lift off atop a Russian-built Soyuz rocket from the Central Asian spaceport of Baikonur Cosmodrome in Kazakhstan.

Volkov, a second-generation cosmonaut, and Kononenko will relieve Whitson and Malenchenko, who are nearing the end of a six-month mission aboard the station that began last October. Reisman will aboard the ISS to join the Expedition 17 crew.

Yi, a 29-year-old mechanical engineer, will fly a 10-day mission to the station under a commercial agreement between Russia's Federal Space Agency and the South Korean government. She is due to return to Earth on April 19 with Whitson and Malenchenko aboard their Soyuz TMA-11 spacecraft.