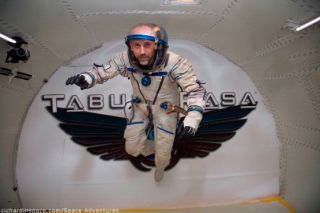 Spacetourist-to-be Richard Garriott is calling on the ingenuity of British studentsto come up with a science experiment for his upcoming flight to the InternationalSpace Station (ISS).

Garriott, anAmerican computer game developer, is currently in Russia training to flyaboard the Russian Soyuz rocket that will ferry him and two professional astronautsto the space station in October. But Garriott is also working to make the $30million flight more than a mere orbital joyride and is searching for experimentcandidates from United Kingdom (UK) students to add to his own science missionas part of his "Space Challenge!"

"I amdedicating my spaceflight to science and enterprise," Garriott said in astatement, who plans to perform Earth observation and protein growthexperiments during his flight. "We need more than great ideas — we need to makethem happen."

Garriott ischallenging primary school students in the UK between ages 7 and 10 to designan experiment that he could perform during hisstay aboard the ISS. His father, former NASA astronaut Owen Garriott, isserving as the spaceflight's chief scientist and will review the submitted experimentsalongside British scientists Samantha Wynne, of Cambridge University, and the QueenMary, University of London's Peter McCowan.

A second challenge,for secondary school students ages 11-19, invites them to envision how privateenterprise may evolve for space tourism companies like the Virginia-based firmSpace Adventures that brokered the younger Garriott's upcoming trek to the ISSwith Russia's Federal Space Agency.

Thedeadline to enter both challenges, which are part of the "UK Civil SpaceStrategy 2008-2012 and Beyond" effort, is June 20. Winners will be announced onSept. 28 by NASA astronaut Piers Sellers, a British scientist-turned-astronaut,at the International Astronautical Congress in Glasgow.

The BritishNational Space Centre (BNSC) and the Virginia-based tourism firm SpaceAdventures are also working on the contest.

"We'redelighted by this opportunity for UK students to experience the excitement ofreal science from the curriculum, and to see their experiments carried out byRichard Garriott on his flight to the International Space Station later thisyear," said Jeremy Curtis, of the BNSC UK Space Strategy Group, in a statement.

The Austin,Texas-based Garriott, 46, will become the sixth space tourist — and firstAmerican second-generation astronaut — to visit the ISS when he launches inOctober with two members of the station's Expedition 18 crew. He is the creatorof the Ultima computer game series and has said he was contemplating paying anextra $15 million to add a spacewalk to his orbital flight.

Garriotthas spent the last several weeks at Russia's Star City-based cosmonaut trainingcenter to learn Russian and familiarize himself with the Soyuz spacecraft. Hewill return to Earth with the outgoing Expedition 17 crew, which iscoincidentally commanded by Sergei Volkov — Russia's firstsecond-generation cosmonaut to fly — at the end of his spaceflight.

Clickhere to learn more about the "Space Challenge! Extreme Science and Enterprise"contest on Garriott's mission blog.