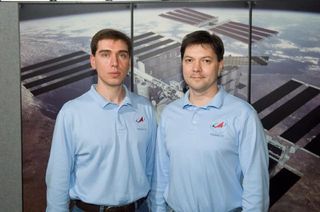 Cosmonautcommander Sergei Volkov and flight engineer Oleg Kononenko will serve as the coreof the space station?s Expedition 17 crew when they arrive at the orbital labthis spring. SouthKorea?s Ko San, an artificial intelligence expert, will accompany them tousher his country into the realm of human spaceflight.

?We arebringing a lot of experiments,? Ko told reporters in a Tuesday briefing, addingthat it was an honor to serve as his nation?s first spaceflyer. ?I hope that itwill be successful so that we can continue the program into the future.?

Ko and theExpedition 17 crew are slated to launch toward the ISS on April 8 from the Kazakhstan?s BaikonurCosmodrome aboard a Russian-built Soyuz spacecraft. The launch will kick off aplanned six-month mission for Volkov and Kononenko, who represent Russia's Federal Space Agency and will make their firstcareer spaceflights during Expedition 17. A series of NASA astronauts willrotate out as Expedition 17 crewmembers during the spaceflight.

?We haveall trained together for a really long time,? said Volkov, who is asecond-generation cosmonaut as the son of veteran spaceflyer Alexander Volkov.?We are, all of us, well-motivated [people] and we want to perform our flightas successful as it is possible to do.?

TheExpedition 17 cosmonauts will relieve the station?s current caretakers - Expedition16 commander Peggy Whitson and flight engineer Yuri Malenchenko - who arein the midst of their own six-month mission to the ISS. The third member oftheir crew, NASA astronaut Garrett Reisman, is expected to launch to thestation before Volkov and Kononenko as part of the agency?s STS-123 flight to deliver a robotic arm addition and the first segment of Japan?sthree-partKibo laboratory to the ISS.

Ko willspend about nine days aboard the ISS before returning to Earth with theExpedition 16 crew. He was chosen from a field of some 36,000 applicants toserve as South Korea?s first astronaut and perform 18 experiments aboard the space station, Ko said. Yi Soo-yeon, a female mechanical engineer, will serve as Ko?s backup for thespaceflight.

Volkov andKononenko hope to preside over the April arrival of another robotic armand a large pressurized module for the Kibo lab, and look forward to theplanned September delivery of new equipment that will allow the station tosupport larger, six-person crews. Two planned shuttle flights, aimed atlaunching on April 24 and Sept. 18, respectively, will each ferry a new U.S. crewmateto the ISS.

NASA?srepeated delays to its upcomingSTS-122 mission - to launch no earlier than Feb. 7 after fuel sensorglitches thwarted a December liftoff - have cut Reisman?s mission about a monthshort. He initially hoped to launch to the station on Feb. 14 before NASArescheduled the space shot to March, but dealing with unexpected changes is partof the job, he said.

Fellow U.S. spaceflyerGregory Chamitoff, meanwhile, will relieve Reisman during the April shuttlemission while crewmate Sandra Magnus - the only veteran spaceflyer of theentire Expedition 17 crew ? plans to join the spaceflight in September and stayon for part of the next ISS mission.

?They?reall rookies and they have not flown in space yet,? said Magnus, who helpeddeliver part of the station?s backbone-like main truss during NASA?s STS-112shuttle flight in 2002. ?But by the time I arrive, they?ll all have more time inspace than I do.?