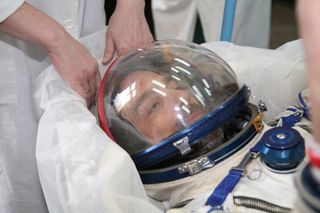 Space tourist Richard Garriott wears a Russian Sokol pressure suit during a seat liner fitting in Russia's Star City. He is due to launch to the International Space Station in October 2008.
(Image: © www.richardinspace.com/Space Adventures.)

The clock isticking for young artists hoping to draw up an emblem for the next paying touristto visit the International Space Station (ISS).

Americancomputer game developer Richard Garriott, a multimillionaire training to launchtoward the space station this fall, is looking for an original design that couldserve as a student mission patch or t-shirt in a contest organized by the ChallengerCenter for Space Science Education.

Launched inlate March, the art competition is open to students of all ages across the U.S.to submit a design that reflects the ?the adventure and discovery of spaceflight,?center officials said in a statement, adding that final entries are due byApril 18. While submissions will be collected into a design gallery, thewinning emblem could ultimately fly in space, they added.

Garriott, 46,is paying$30 million for an October launch to the station under an agreementbrokered with Russia?s Federal Space Agency by the Virginia-based U.S. spacetourism firm Space Adventures. His mother Helen is an artist, while his father Owenis a retired NASA astronaut who flew to NASA?s Skylab space station in 1973,and later on a space shuttle mission.

?I feelthat I was very much inspired by both of my parents, my father from a scienceand technology standpoint, of course, but [also] my mother as a professional artist,?Garriott told SPACE.com in a recent interview.

The ?StudentPatch Contest? is one of severaleducational-themed activities planned for Garriott?s flight in conjunctionwith the Arlington, Va.-based Challenger Center and outletsin the United Kingdom. Garriott has said that he hopes his flight will spuryouth interest in space and science through activities before launch, aboard thespace station and after his return.

At noon(EDT) on April 21, he is expected to hold a live webcast with students at the ChallengerCenter to answer student-submitted questions from the Russian cosmonauttraining center in Star City, Russia. Students have until April 18 to submitquestions for the space tourist, center officials said.

Garriottsaid he hopes to take artwork along on his spaceflight, some of it created by his mother, and host an orbital art show aboard the space station. He also hopes to create someart of his own.

?I?m notparticularly a fine artist myself,? he said. ?I want to create something thatdemonstrates properties of zero [gravity] and hopefully has some visualinterest also.?

Hiscreations, he hopes, will return to Earth and be sold in auctions to raise fundsfor charities.

WhileGarriott must wait until October to launch to the space station, his return ridehome is gearing up for a Tuesday liftoff.

The SoyuzTMA-12 spacecraft that will ferry Garriott back to Earth after his spacestation stay is slatedto launch tomorrow at 7:16 a.m. EDT (1116 GMT) from the Central Asianspaceport of Baikonur Cosmodrome in Kazakhstan. South Korea?s first astronaut,So-yeon Yi, and Expedition 17 cosmonauts Sergei Volkov and Oleg Kononenko will launchaboard the Soyuz spacecraft.

Garriottwill return home with Kononenko and Volkov, who by coincidence is also the sonof a professional cosmonaut, making their landing this fall the first with twosecond-generation spaceflyers aboard. Yi will return to Earth with the station's outgoing crewmembers when they land on April 19.

Click here formore information on the rules and application information of the ?Student PatchContest? under way by the Challenger Center and Richard Garriott. Students can click hereto submit questions for the live webcast with Garriott.

?Garriottis documenting his mission at his personal Web site: http://www.richardinspace.com.